After two and a half years in office, Mrs Thatcher’s government had abolished exchange controls, reduced the top rate of income tax from 83% to 60% (later to 40%) and introduced firm monetary policy which would see inflation fall from 25% to 2.5%. Her critics – such as the 364 economists (including Mervyn King) who wrote to The Times – said that it would not work. But it was done. And the strong medicine prescribed to cure Britain’s economic sickness did work.

After two and half years in office, the Coalition has cut the top rate of income tax from 50% to 45%. But yesterday’s Autumn Statement did not contain any similarly strong cures for our current economic ills. Yes, the Chancellor played a bad hand yesterday relatively well, honestly presenting the growth outlook as awful. But he also sought to triangulate, claiming the Labour Party wanted to increase the debt burden even higher than it is today, while criticising those who advocate deeper cuts for failing to acknowledge the frailty of the economy. In other words, he claimed cuts are good for the economy but cuts are bad for the economy. Sort of.  And of course, only the exact path the Chancellor has taken is right.

Many would disagree. Estonia took their medicine in a big one time hit, initiating supply-side reforms at the same time, which kept their deficits low and has now seen the recovery of lost output. But George Osborne instead keeps tinkering away in the hope that growth will pick up and the deficit will prove more cyclical than we thought.

Why has growth been so slow? To answer that question of course requires us to understand the international context, including the on-going Eurozone trauma, and the fall-out from the financial crisis. But we also must acknowledge the structural factors which make a return to growth unlikely in the short-term and on unchanged policies:

On top of that, small businesses are overregulated, energy policy has been incoherent for the last 20 years, the banking system is still dysfunctional, our exports are still rebalancing from declining economies towards growth economies and private debt is at historically high levels. We’ve had a perfect slow-growth storm.

Yes, the Coalition is pushing in the right direction on many areas, but it is not going nearly far enough, nor is it going quickly enough. On spending, for example, the Chancellor claimed that the £17 billion in additional consolidation required to meet his debt target would not be undertaken given the apparent cyclical nature of the revisions down of forecasts. But this view is reliant on the OBR being right about its growth forecasts in a few years’ time (anyone care to bet on 2.4% growth in 2014/15?), when thus far it has been consistently over-optimistic.

More, much more, needs to be done to restore health to the government finances. It is fanciful to believe this can be achieved merely by savings in administration, or freezing certain departmental spending limits while ring-fencing vast swathes of the public sector. What is needed is a fundamental re-examination of the scope of government and of the eligibility for government transfers.

If Osborne is still unwilling to face up to the full scale of the challenge, then the opposition party aren’t even in the arena. Their response since 2010 has been an insult to the electorate. Education, health, benefits and debt interest make up 72% of our budget. Yet they’ve opposed any cuts to schools, made a big song-and-dance this week about a tiny real terms cut to the NHS in a year in which they set the budget, and now look set to oppose the restricting of benefit rises. No doubt their politicians will fill our screens chuntering about the unfairness of yesterday’s measures – ably backed up by several think-tanks’ distributional analysis. The problem with this type of work is that it doesn’t define a relevant counterfactual. More debt is no free lunch. Those obsessing over ‘who loses out’ don’t seem to acknowledge this. We are poorer than we thought we were and people are going to be worse off.  The analysis therefore isn’t just misguided, but dangerous. Just 6% of the electorate now realise that even the Coalition are raising the debt by over £600 billion. In that context, what hope is there of telling the electorate the problems are going to take a much bigger effort to cut spending?

GROWTH DOWN, BORROWING UP (AGAIN)

“The forecasts were largely as expected – growth revised down, borrowing revised up and the deficit and debt targets pushed back. Rather unhelpfully, the changes to QE cash management, the Royal Mail pension plan and the reclassification of Northern Rock and Bradford & Bingley means there are now many different figures flying around. But when you really strip back and look at the underlying picture you see a worse deficit, a worse structural deficit and higher debt than forecast in March.” – Ryan Bourne, Head of Economic Research

To see how much the Office for Budget Responsibility has revised down our growth forecasts since 2010, consider the chart below. Yesterday saw growth revised down in this and each of the next three years. 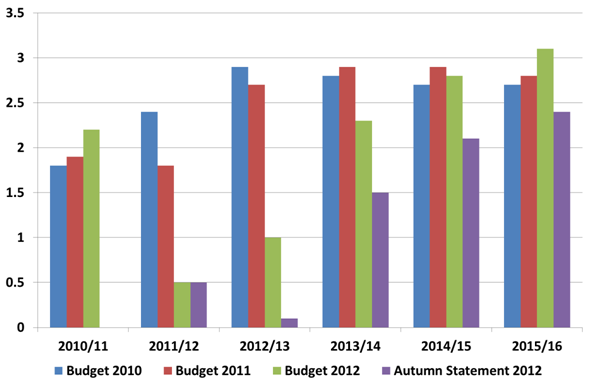 But even these new revised figures still look more optimistic than the average of independent forecasters presented by the Treasury:

The net effect is that borrowing will be higher than first thought. Looking at what has happened to the overall deficit has been complicated by the inclusion of several accounting factors (for example, how to include transferring assets from the Royal Mail pension to the public sector and the Asset Purchase Facility cash management changes for QE). Once these are stripped out, the deficit is going to be significantly higher as a proportion of GDP than forecast in the Budget (compare the bottom and top rows in the table below). By the end of the Parliament in 2014/15, the deficit will be 5.9% of GDP once these items are stripped out, compared to the 4.3% forecast in the Budget.

This higher borrowing meant the Chancellor had to re-assess his two fiscal rules: to eliminate the structural current deficit within five years, and for net debt as a proportion of GDP to be falling by 2015/16. Readers of this bulletin will know that we have said repeatedly the first rule - the fiscal mandate -  was meaningless without the supplementary rule because it has been described as a ‘rolling’ target (i.e. you only ever have to promise it will be met in five years time). Though yesterday’s headline numbers suggested that the structural current deficit will be eliminated by 2015/16, once the Asset Purchase Facility change is factored out the Chancellor has once again rolled this mandate forward – this time to 2017/18. In other words, what Osborne promised to do in five years, he now promises to do in seven or eight.

More importantly, George Osborne said in the 2010 Budget: “In order to place our fiscal credibility beyond doubt [we will have] a fixed target for debt” – i.e. that debt would be falling in 2015/16. Yesterday, he admitted that the Coalition is no longer to hit that target. Net debt is now forecast (according to the headline figure) to peak in 2015/16 at 79.9% before falling thereafter. Once the Asset Purchase Facility effect is factored out debt will peak higher at 83.6% in the same year. The Chancellor chose not to adjust spending to meet his debt target. 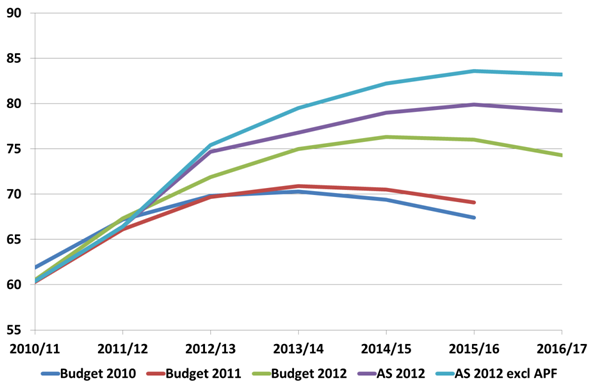 Here is the Chancellor’s massive gamble: he is staking everything on assuming that constraining public spending will be enough to maintain confidence. But will continued poor performance on growth, with resultingly lower tax revenues and higher deficits, lead to a loss of market confidence in the future? This risk in addition to the potential economic effects of high debt mean that non-adjustment of plans should not be a considered a painless option.

The Chancellor chose not to adjust his spending plans, however.  We sail on as before.
There were the usual range of micro-initiatives, some welcome, some not so welcome. But we urge you bear in mind that we live in a £1,500 billion economy, which has been propped up with £375 billion of QE, and £500 billion+ of deficits since 2008, and where the government spends over £700 billion (the equivalent of £80 a day for every household). In this sense the measures which grab the headlines can only be considered as pretty small fry. In addition, a concern going forward is that many of the tax revenue hikes used to pay for continued high spending come from largely one-off revenue sources, such as the 4G auction or the raid on Swiss bank accounts.

CONCLUSION: THIS IS MORE ABOUT WHAT WAS NOT ADDRESSED

This mini-Budget was a microcosm of the Coalition so far. In many ways it is pushing in the right direction, but the measures are not nearly confident or radical enough. Having laid out the predicament of low growth, high debts and the need to be competitive so clearly, the Chancellor’s solutions seem weak in response.

This Autumn Statement was more about what was not said.

Finally, the Coalition must stop fighting on New Labour’s terms. Ultimately it is innovation and improvements in productivity which increase prosperity. Yet terms like ‘entrepreneurship’ and ‘innovation’ were notably absent from the Chancellor’s speech. Instead the Government renewed its narrative of fairness. But ‘fairness’ is usually interpreted as ‘never taking away or scaling down government transfers to the relatively poor’ by their opponents. This means Ministers will never win the debate against those who compare outcomes against a world where no cuts are made.

It is time for Ministers to treat us as grown-ups. Too many people have been left in the dark about how bad the nation’s finances actually are. Cutting government spending to the extent necessary will inevitably mean many are made ‘worse off’. In the medium term, there really is no alternative. What would be really unfair would be to leave an unreformed low growth economy and even higher debts to future generations.