11 Reasons to be Full of Festive Cheer

“There are no great limits to growth because there are no limits of human intelligence, imagination, and wonder.”

At the Centre for Policy Studies, we’re very fond of the Ronald Reagan quotation above. We believe mankind’s best days are still to come, and that the United Kingdom still has the capacity to thrive. We dismiss the growth pessimists, who claim that innovation is slowing, and we see the increasing economic power of the East as an opportunity, rather than a threat. We believe that the free market system is the best economic system we’ve ever known, and that liberal economic policies have helped lift billions of people around the world out of poverty. We want more wealth to be created through free trade, entrepreneurship and innovation, and are not content with arguing about how best to divide up the pie. As our co-Founder Margaret Thatcher said, “if you want a bigger slice of cake, bake a bigger cake.”

Our economy faces huge challenges at present. Growth has been pitifully slow.  The UK state is still far too big, and is borrowing, spending and taxing far too much. Our banking system is still dysfunctional. The euro crisis still looks some way short of a full solution.

But at times, we work ourselves into a frenzy about negative headlines and pessimistic forecasts. Positive economic news or trends can be underreported.

As we approach Christmas and the New Year, we set out 11 reasons to be optimistic. We face tough times ahead, but we should not be fatalistic about the future.

HSBC’s research of global trends suggests that almost 3 billion people (40% of today’s population) will join the middle classes by 2050. By then, the average Chinese worker’s income is forecast to increase sevenfold. All the economic evidence suggests that as people get richer their relative demand for services increases more quickly than their demand for manufactured goods.

The UK is therefore in a great position to benefit from its comparative strengths in financial services, the professions and the creative industries. We’re already seeing these trends, with a rebalancing of activity away from Europe towards the East: UK exports to China in 2011 were £13.78 billion (including goods, services and other income e.g. remittances), up 17.6% on 2010. And in the same year UK exports to India increased by 29%, making India the UK’s largest non EU market. UK exports to Asia are forecast to grow at 9% annually between 2013 and 2015.

2)      Employment (willingness and flexibility to compete)

In comparison to many other EU economies, the UK has a relatively flexible labour market. And so, despite the UK’s poor growth in the past year or so, the employment rate has performed relatively well. As the chart below shows, the reaction to the 2008 shock did not have anywhere near as large an effect on the employment rate as we had seen in previous recessions, and over recent months unemployment has been falling consistently.

This shows the effectiveness of the supply-side and labour market reforms seen over the past two decades. More, much more, can be done to deregulate the labour market – but we should be grateful for past decisions. 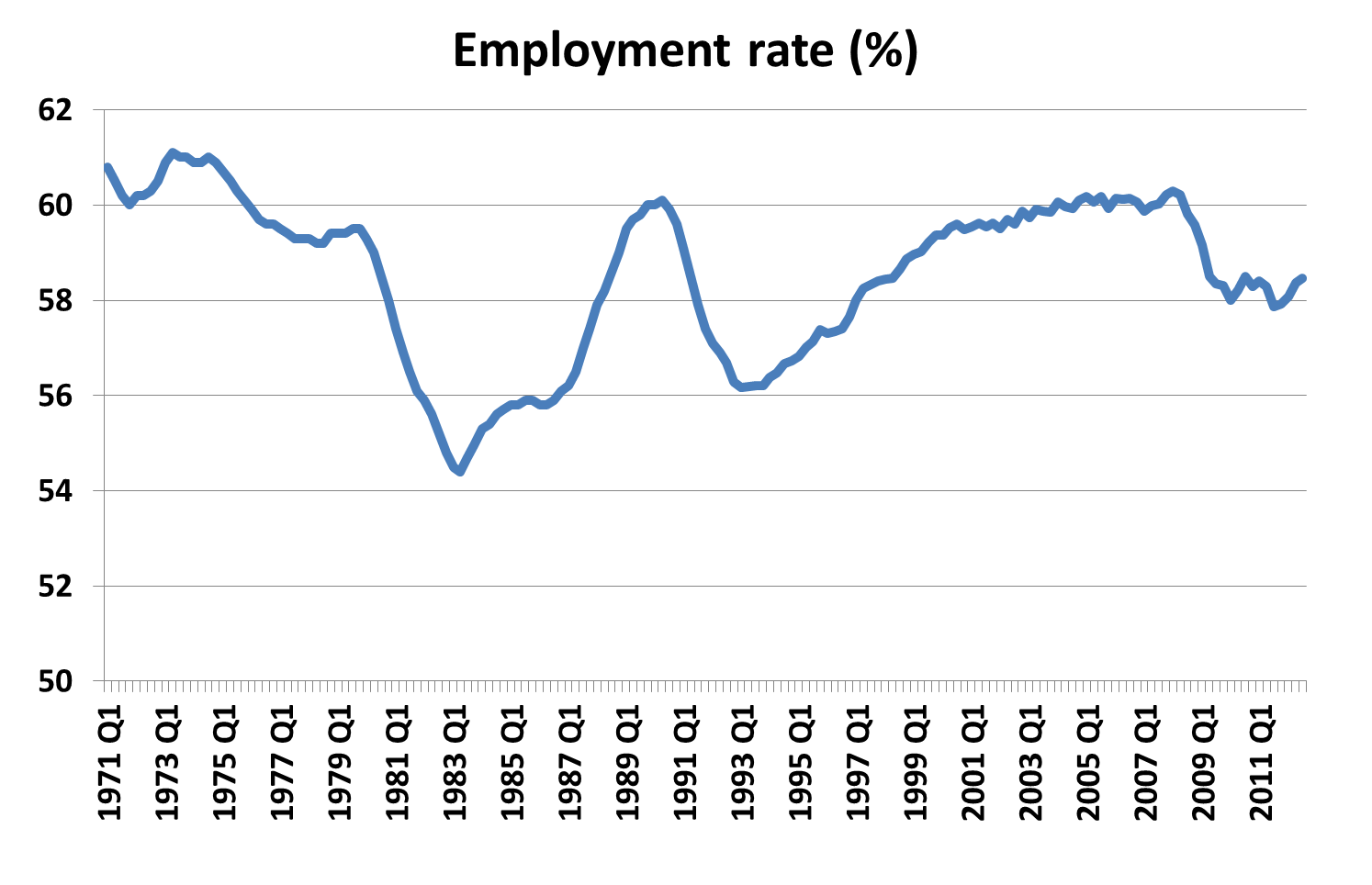 The ranking of the UK in each of the two main international league tables of world competitiveness fell significantly between 1997 and 2010. This relative decline is now being reversed.

Having fallen from 7th to 12th in the Global Competitiveness Report published by the World Economic Forum (WEF) between 1997 and 2010, the UK has regained lost ground in the past two years, and is now back up to 8th. As the WEF highlights, the UK has further enhanced the efficiency of its labour market (now ranked 5th of 144), and continues to have a sophisticated and innovative businesses environment. In addition, it has improved significantly in terms of the ‘wastefulness of government spending’ (from 72nd in 2010 to 34th in 2012), and the ‘effects and extent of taxation’ (from 95th to 77th). Similarly, between 1997 and 2010 the UK fell from 9th to 22nd (out of 59) in the World Competitiveness Yearbook published by the Institute for Management Development (IMD), but has recovered somewhat to 18th in 2012. In the past two years ‘Government efficiency’ has improved from 26th to 23rd, and ‘Business efficiency’ from 28th to 22nd. 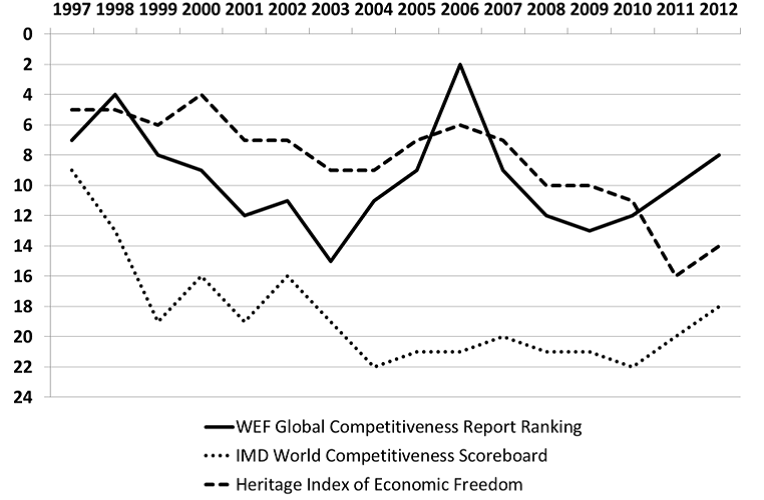 4)      We are an entrepreneurial nation

The past year has seen the number of enterprises increase for the first time since 2008. There were 2.15 million enterprises registered for VAT and/or PAYE in March 2012, compared with 2.08 million in March 2011. Around half of this increase was due to changes in HMRC computer systems which meant that previously excluded businesses were added. But, even accounting for this, it is still significant that for the first time since the financial crisis the number of registered enterprises is growing again. 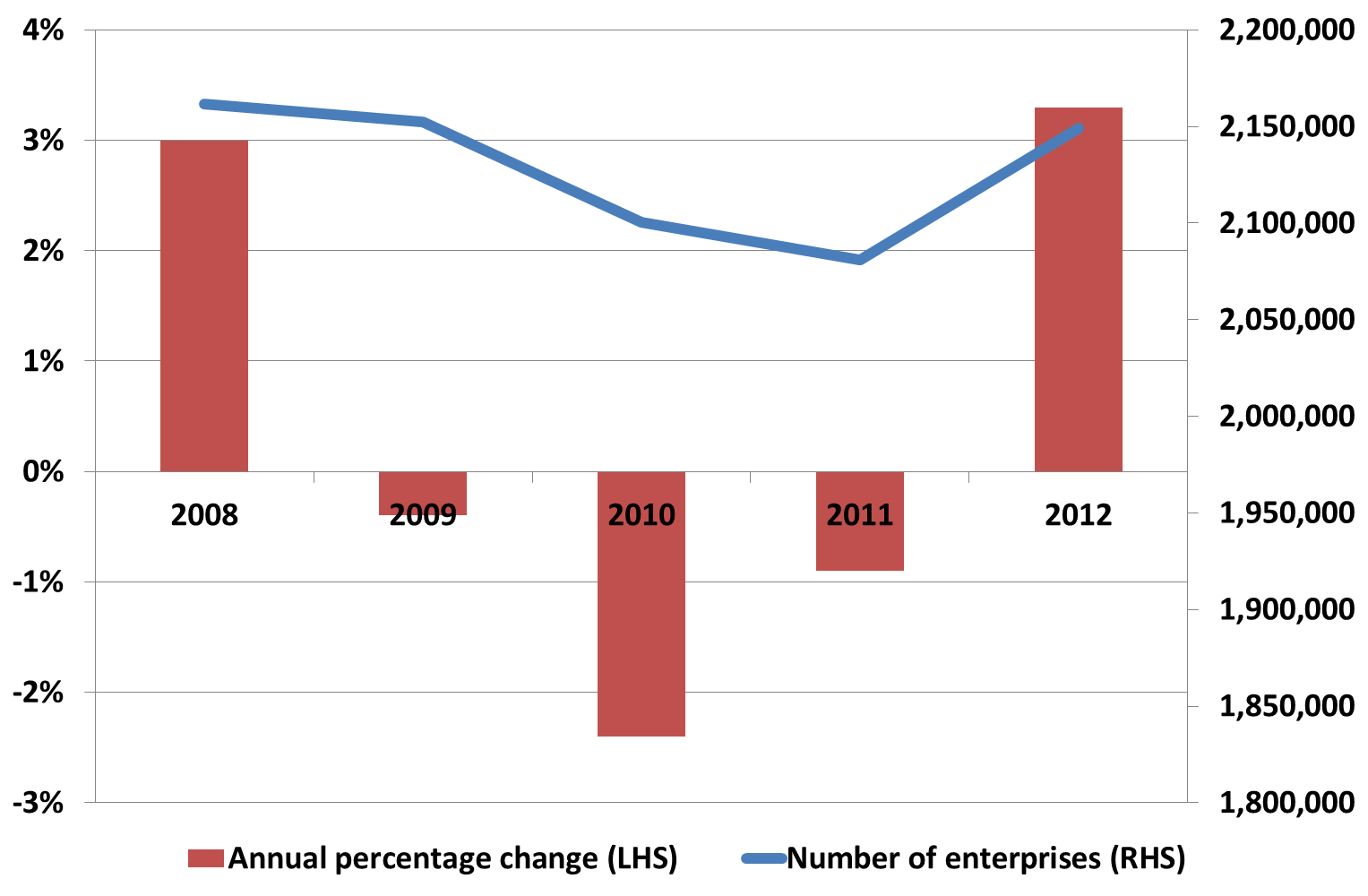 Digital communications, in particular the internet, could be a huge driver of growth in the coming years. And according to research released earlier this year, the internet contributes a bigger share to the UK economy than in any other G20 country.

We are a world leader in video games (whose sales now outstrip those of films). And the UK’s digital economy grew at 10.9% in 2011, higher than the average of 8.1% across the G20 countries. It is forecast to grow by around 11% a year until 2016. In fact, the Boston Consulting Group reckons that if the digital economy was defined as a traditional sector, it would be larger than UK construction, education and utilities. Tech City in East London, for example, has gone from 200 digital companies to over 1200 in just two years, and now supports around 48,000 jobs.

For too long, succeeding governments have failed to implement a coherent and consistent energy policy. The recent decision to adopt a carbon price floor from next year – unilaterally hiking the price of carbon – was particularly regrettable.

But two recent Coalition initiatives are most welcome: to give the green light to shale gas exploration, and to set out its plan for significant new nuclear plant. Though it is unclear just how big an effect shale gas in the UK will have, its success would go some way to mitigating both fuel poverty and our rising dependency on gas imports. And if new nuclear build can be negotiated at a reasonable strike price, then we would enjoy the great benefit of better security of energy supply: shale will be domestically produced, and the uranium ore required for nuclear is can be supplied by open, stable democracies like Canada and Australia.

7)      People are realising our tax system is broken

Our tax system needs radical reform. Recent evidence has shown that the 50p tax rate was highly counterproductive. Furthermore the public reaction to recent cases of legal corporate tax avoidance has highlighted how a complex system with loopholes and exemptions acts to undermine a competitive market, particularly when intellectual property (which is so mobile) is considered.

The political response to these cases has been to enforce tax policy through public castigation. But this is unsustainable, arbitrary and unfair. It also damages the attractiveness of the UK for foreign investors. It is only a matter of time before even politicians accept that the best tax system is one that is competitive and simple, with broad tax bases and low marginal rates.

While the euro crisis drags on and on, the attractions of the Commonwealth grow and grow. Commonwealth nations now consists of 53 member states and 2 billion citizens, and account for over 15% of world GDP. And they are forecast to grow extremely quickly in the coming years: the labour force alone is expected to increase by 60% by 2050.This can only be good news for the UK, which still shares strong cultural, legal and business ties with many of these nations.

Language is also an important common bond. Recent economic research by Professor Pankaj Ghemawat has shown that countries with a common language and former colonial ties tend to trade much more than with other countries, even those with a common currency. This suggests that the Coalition is right to explore how to deepen Commonwealth and integration and, in the event of any changed relationship with the European Union, should consider the possibility of a Commonwealth free-trade area.

9)      The success of the Olympics and Paralympics

The real lesson of the Olympic and Parlympic games was that the combination of individual talent and hard work can bring great results. Britain’s fantastic gold medals haul – just behind the US and China – was of course partly dependent upon money from the National Lottery, which provided coaches and infrastructure. But, with a large number of the gold-medal winners having come from public schools, or from Yorkshire where the old local athletic clubs still thrive, or from the working-class boxing clubs of London, the victories were those of individuals supported (in large part) by local institutions. What’s more, we rightly celebrated well-earned success for individuals most of whom were competing for personal glory — and not some collective effort. There were no calls for medal redistribution, nor were there any demands that “all should have prizes”.

The Games showed that classical free market principles work and are popular. What we need, in sport and in the economy, is to eliminate unfair competition, provide good infrastructure and free up those with ability, talent and determination to flourish.

10)   The overhaul of a failing state education system

The quality of a nation’s education system has a fundamental role in the economy’s long-term growth prospects. The starting point for raising human capital begins with education, and the UK has lagged behind the best performers recently.

That is why Michael Gove’s reforms are so necessary and so welcome. The extraordinary growth in free schools and academies (there are now 2,309 of the latter – up from just 203 when the Coalition came to power), the drive to synthetic phonics, the bold re-writing of the National Curriculum and moves to end national pay-bargaining are all important steps to a more effective education system (and one hopes politicians will stop meddling in higher education soon).

It will of course be a long time before there is an economic pay-off for these reforms. But Michael Gove should be commended on his determination to enforce much-needed change.

If you think things are bad now, think how much worse they would be if the UK had entered the Eurozone, or if we were following the disastrous policies of Francois Hollande!