Some Perspectives on GDP Growth

As ever, last week’s preliminary GDP figures have formed a major part of the political and economic discourse since last Friday. The estimated 0.3% contraction of the economy in 2012 Q4 means that there’s a chance of a triple-dip recession. This comes with all the usual caveats of course: GDP first estimates tend to be unreliable, and – as Simon Ward has explained - the estimate seems heavily predicated on an ONS guesstimate of construction activity falling by 16%. It’s also worth bearing in mind that the Office for Budget Responsibility had forecast a contraction in Q4 (albeit of 0.1%), driven mainly by the effect of the one-time Olympics boost from 2012 Q3 dropping out of the figures. If we take their figure of 0.3% as given, this suggests our economy was completely flat in 2012 Q4.

The long-term trend is clear though: output has been largely stagnating whilst employment figures continue to improve. This has led to what economists have termed the ‘productivity puzzle’ –the amount produced per person has been incredibly disappointing. Of course, this is the exact reverse of what was seen in the 1980s recovery, when output was growing quickly but unemployment kept rising into the middle of the decade. Given economists have since then largely treated unemployment as a lagging indicator, the current circumstances are a cause of much consternation.

There’s no doubt the economy is still struggling terribly. In Q4 2012 output was still 3.3% below the pre-crisis peak of 2008 Q1, meaning that only about half of the output lost in the recession (which saw a 6.5% fall peak-to-trough) has been recovered. Compared to a situation in which the economy continued to grow at the trend rate of growth achieved between 1995 and 2007, the economy is over 18% smaller. It’s important to note here that we are talking about trend growth rather than the Office for Budget Responsibility’s potential growth. 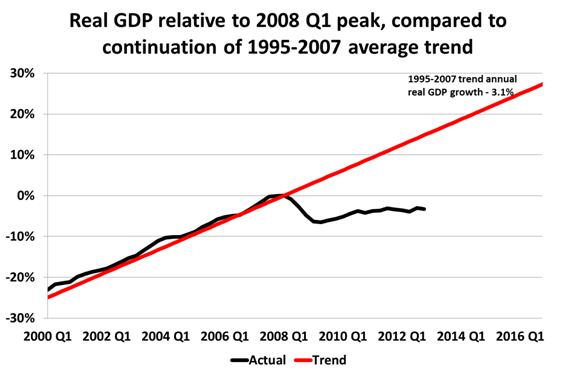 But is this really a good means of comparison? A large part of the disagreement on the economy stems from how you view the sustainability of the preceding boom. Given we know that much of the growth between 2000 and 2007 was down to the expansion of government spending and financial services industries (as well as population growth), is comparing our performance now to the height of the boom appropriate or meaningful in any way?

Well, no and yes. The chart below compares the level of GDP over time against that seen in 2000 Q1 and compares it to the continuation of the average trend of GDP seen in the long period 1965-2000 before the 2000s boom. What this shows is that the economy was indeed above its long-term trend between 2003 and 2008, but that since the crisis the economy has fallen well below this average trend and is showing little sign of catch-up. In fact, even on this measure the economy is 13.9% smaller than we might have expected it to be had the crisis not occurred. 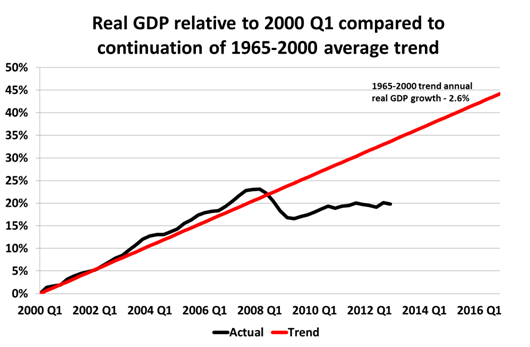 The charts below puts this into a longer term historical trend. Previous recessions in 1979 and 1990, like the recession starting in 2008, saw output trough about 15 months after the start of the recession. But whereas the lost output was recovered in the first two cases after around 33 months and 38 months respectively, we are currently still well below the output of 2008 Q1 57 months on. In fact, at this stage after the 1990 recession, the economy was 8% bigger than the previous peak. 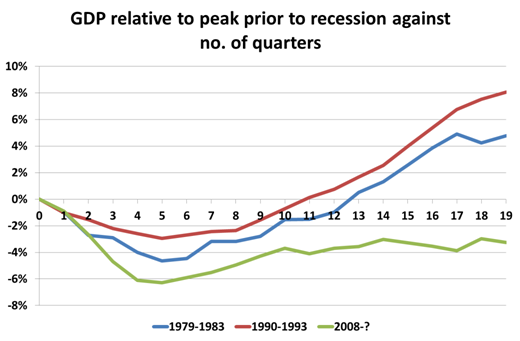 And whereas the previous recessions saw significant catch-up growth to take us back to the long-term trend, this sort of catch-up growth has so far not been forthcoming. 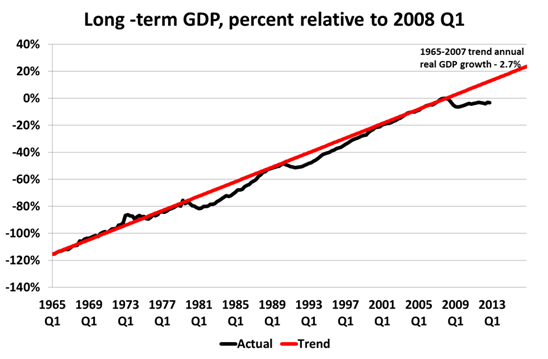 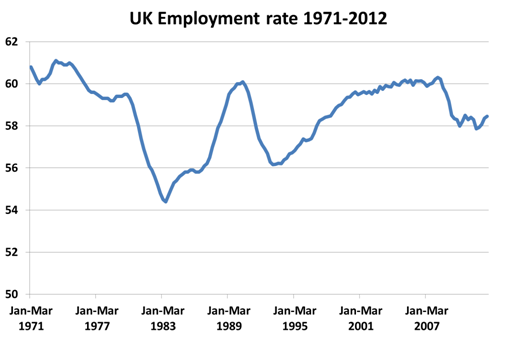 …the overall stagnation can only signify that productivity has been very disappointing. 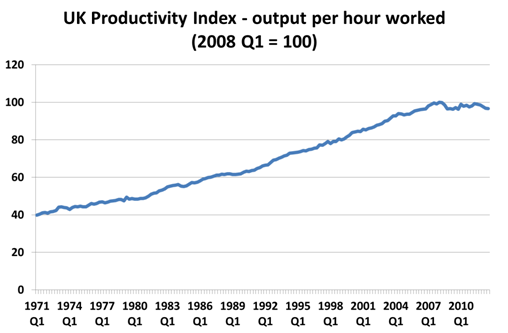 There is a huge debate about the causes of this. Immediately after the crisis demand pessimists thought that ‘labour hoarding’ provided a good explanation, i.e. firms were willing to hang on to workers in the hope that an upturn might soon come. However, four years on, that explanation now seems insufficient, particularly now we are seeing significant new hires. A much more compelling explanation has been given by Ben Broadbent at the Bank of England, who has explained how the economy has become poor at capital allocation in the aftermath of the crisis, and this is leading to the survival of unproductive businesses and companies. This might be good news for those struggling companies and their employees, but it is bad news for growth, which of course the Prime Minister has repeatedly said is his priority.

THIS TIME IS DIFFERENT

The Office for Budget Responsibility clearly thinks that this time really is different. Their December 2012 Economic and Fiscal Outlook produces figures for ‘potential output’ for the UK economy. These have been revised down over the past couple of years, to the extent that now they estimate that potential output for 2012 was just 0.5%, for 2013 is just 1.7%, with the medium-term potential growth of 2.2% for 2016 and 2017. This is way below the 3.1% trend we saw between 1995 and 2008, and lower also than the 2.7% average growth rate for 1965-2008. That these estimates of potential growth are so much lower – the idea that we are in a ‘new normal’ – will of course have huge consequences for living standards.

And after £375 billion of Quantitative Easing (£1,500 per household) with near zero interest rates and over £520 billion of deficit spending (£2,100 per household) since 2008/09, last week the Governor of the Bank of England’s speech implied that he now believes that structural and supply-side forces are what is holding the economy back from growth.

If this is correct, then – as Andrew Lilico has argued – using expansionary monetary and fiscal policy will not solve the problem. The need is to take measures which will improve the underlying growth rate of the UK economy rather than attempt short-term fixes in which we substitute future consumption for current consumption.

To understand what measures can be taken to improve the sustainable growth rate of the economy requires us to examine potential factors which have been known to slow growth.

First, it seems clear that the destruction of supposedly highly productive financial services output is likely to have affected the growth figures. What’s more the piecemeal reforms and lack of a wholesale clear-out in that sector could potentially be causing a significant drag on the UK economy. At a recent CPS lunch, Liam Halligan explained how the inaction in recognising losses on bank balance sheets had led to a breakdown in trust in the system on the grounds of counter-party risk. Until necessary reforms are undertaken and this trust is restored, the economy is likely to continue to under-perform as the vital function of capital allocation is undermined.

Second, the current extent of government spending is not conducive to economic growth. Study after study has found (including Afonso and Furceri (2008) and Bergh and Henrekson (2011)) that higher government spending as a proportion of GDP leads to a slower annual growth rate. For every 1% of GDP going to the public sector, seems to lower growth by 0.12 – 0.13 %. Public spending was as low as 36.6% of GDP in 2000 but is still now at 49% of GDP, and so the scale of public spending is likely to prove a significant drag on medium-term growth.

Third, the UK’s gross public debt burden has breached the 90% of GDP figure which the work of Reinhart, Reinhart and Rogoff has shown tends to lead to a significant period of stagnation. The Chancellor knows this. His Mansion House speech cited their work, which showed that the typical episode with debt at these levels lasted 23 years and was associated with slower annual growth to the tune of 1 percentage point per year. Of course, large exogenous shocks can lead to huge increases in debt. But the duration suggests high debts and slow growth are self-reinforcing. The problem is that the policies used to deal with the debts can slow growth through the discouragement of investment: whether it be because of a burst of unexpected inflation, higher taxes, financial repression or the confiscation of wealth. Many of these policies have been mooted or attempted across the Western world in recent years, and we're likely to see a variety of them in the coming years.

For the reasons outlined in this post, we maintain that the Government must keep a relentless focus on reducing the burden of government spending whilst at the same time doing whatever possible to raise the medium-term growth rate. In practice this therefore means:

In the upcoming Budget the Chancellor has a real opportunity to take forward some of these concepts. Will he take it?