What did privatisation do for us?

With the sad death of Lady Thatcher, there has been much reflection on her personality, her achievements and her legacy. Perhaps the most significant example of the paradigm shift in economic management in the period of the Thatcher governments, however, was the range of denationalisation and privatisation of previously state-run industries. This has since been replicated in hundreds of countries around the globe, and is now broadly accepted across UK politics (remember that it was the Labour party that privatised the Air Traffic Control System).

The broad case for this action has been outlined as recently as 2006 by Lady T, who wrote in Reason magazine:

“Too many people and industries preferred to rely on easy subsidies rather than apply the financial discipline necessary to cut their costs and become competitive. Others preferred the captive customers that a monopoly can command or the secure job in an overmanned industry, rather than the strenuous life of liberty and enterprise. But we understood that a system of free enterprise has a universal truth at its heart: to create a genuine market in a state you have to take the state out of the market.”

The Centre for Policy Studies was one of the pioneers of privatisation.

In 1979 it established a nationalised industries Study Group to explore ways of introducing greater competition and private capital into state monopolies such as telecommunications, rail, the electricity supply industry and coal.

The CPS then played a key role in formulating and proposing policies for the transfer of state owned businesses and activities such as BL, British Steel, the Property Services Agency, Associated British Ports, The Forestry Commission and the London Tube to the private sector.

Up until the early 1990s, however, there had been little in the way of hard, factual evidence of the effects which privatisation had had. To fill that void, the Centre for Policy Studies commissioned, by competitive tender, a range of studies on the performance of privatised industries. National Economic Research Associates won the contract, and produced four studies, analysing the safety records, finance, efficiency and prices and service quality of the performance of eight major public corporations or sectors which have been denationalised since 1979: Associated British Ports, British Steel, BAA, British Telecom, British Airways, the regional electricity companies, British Gas, the water and sewerage companies (33 companies in total).

Safety issues were cited as a matter of public policy concern. Opponents of privatisation argued that commercial pressures on newly-privatised companies would lead to cuts in expenditure on safety programmes.

It can be argued that such fears were naive – no private company wants to risk its reputation as a reliable employer or a safety-conscious provider of goods or services.  The important question is whether they were justified.

The conclusions of the Executive Summary were clear:

When the Conservatives came to power in 1979, the major nationalised companies were receiving large sums of taxpayers’ money. NERA’s report revealed that in the year to March 1980, the 33 companies it examined were contributing nothing to the exchequer: in fact they absorbed a total of £483 million between them, including £1.2 billion in loan finance. British Steel was one of the worst companies requiring £1.0 billion in the financial year 1980/81 on a turnover of just under £3 billion (thereby earning itself a place in the Guinness Book of Records).

This dismal state of affairs was shown to have been reversed. In 1987, the 33 companies examined by NERA contributed £8.4 billion to the exchequer. Net contributions then continued right up until 1995: 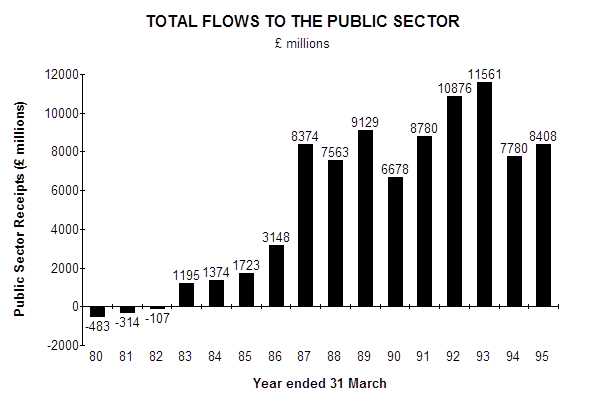 In its detailed study NERA found that:

NERA concluded that this remarkable turn-round is attributable to three main factors:

The precise extent of the tax contribution made by these 33 companies is revealed in the chart below. Note that all but the electricity and water companies had been privatised by the end of 1988, when tax contributions began to soar. By mid-1991 both the electricity and the water industries had been privatised. The rising trend in tax paid can be attributed to the considerable improvement in corporate profitability brought about by improved efficiency and the private sector’s ability to identify and meet consumer needs. 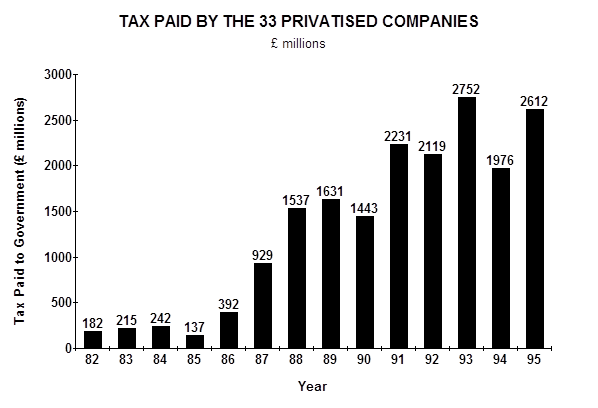 In the third study of the series, NERA pointed out that there had been a lack of serious work done on the productivity performance attained by companies which had been freed from state ownership. To a large extent, this was because of the problems of quantifying productivity performance across a wide range of industries. In particular, there was a problem of specifying what the researchers term a ‘counterfactual’: what would the efficiency trend have been if the industry had remained in state ownership?

NERA’s study on efficiency revealed that the most impressive labour productivity performance was achieved by companies such as Associated British Ports, British Airways, British Steel and BT which were privatised in the 1980s and operated in competitive markets, or markets which were opened up to competition following the transfer of nationalised industries to the private sector.

In the most thorough study of prices and service quality across the regulated industries ever undertaken, the evidence overwhelmingly showed that privatisation benefited the customer – in terms of both lower prices and improved levels of service.

NERA’s research team concludes that, in real terms by 1995:

Only in the water industry did prices rise. These price increases were driven by the need to renew the water and sewerage infrastructure, originally built in the Victorian era, and much in need of an overdue investment programme to meet the much stricter environmental standards demanded by the regulatory authorities. NERA’s analysis showed that higher prices for water and sewerage services led to considerable improvement in water purity and consistent advances in the task of cleaning up sewage disposal. The percentage of the population at risk of water shortage dropped dramatically following privatisation, a reality running counter to popular perceptions.

No mention anywhere if the role of the EEC/EC/EU in this policy.