It is a generally accepted fact that in the long run, what matters for prosperity is improvements in productivity driven by innovation. Taking steps to improve potential productivity growth as a means of raising the trend growth of the economy is thus an important rationale for meaningful supply-side reforms.

Over the years, many politicians have indicated a desire to improve public sector productivity. But this is not as straight-forward as it sounds, not least because a) it is extremely difficult to measure productivity in the delivery of public services, and b) the fact that most public services are things where we are more interested in the outcomes (e.g. better survival rates, life expectancy) rather than the outputs (e.g. number of operations performed).

To see what is meant by productivity, consider the diagram below. The government raises money via taxation and borrowing to pay for the inputs (labour, goods and services, capital) for public service provision. These are then used to provide outputs – i.e. the services themselves, like GP visits, hospital treatments and school lessons. And the aim of these outputs is broadly to improve outcomes according to some stated goal.

Productivity then is really a measure of the outputs you are able to obtain for given inputs. This is not the same as the effectiveness of public services, which are determined by the outcomes they generate compared to the funding which is put in.

Measuring private sector productivity is relatively straightforward: markets set the value of output produced and inputs used. Assessing productivity for public services is much more difficult. Full markets in healthcare, education, social services and policing do not exist, so there is limited price information. That’s why until 2005, the Office for National Statistics (ONS) assumed public service outputs were the same as public service inputs – e.g. a GP appointment is both an input and an output – so productivity was thought to be constant over time.

But with increasing resources directed at the public sector between 1997 and 2010, this assumption was clearly unsatisfactory. So in recent years the ONS has, rightly, made a renewed effort to attempt to come to calculate more accurate measures.

The most recent figures

Amid all the noise surrounding last week’s GDP figures, the publication of the ONS’s Total Public Sector Productivity Estimates was largely lost. The work analyses the outputs and inputs associated with the provision of healthcare, education, social care, public order and safety, the police, defence and other public services. By weighting indices of volumes of outputs across the public services, and weighting indices of volume inputs (labour, capital and goods and services used), it attempts to come to an overall figure for productivity growth within the public sector between 1997 and 2010.

The results, although revised up since last time this exercise was undertaken, are not encouraging. On an overall basis the ONS has calculated that, between 1997 and 2010, outputs from public services increased by 46.3%, whilst inputs went up by 46.5%, suggesting an overall productivity decline of 0.2% over the 13-year period. 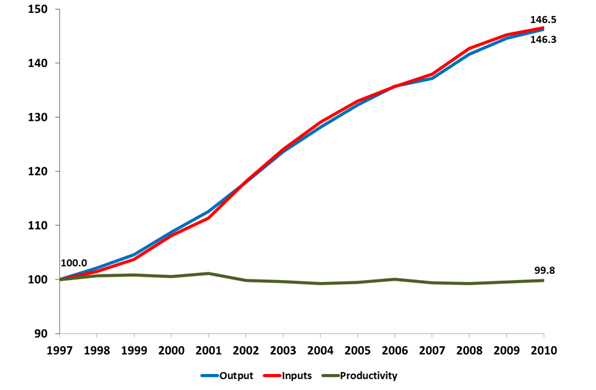 The methodology of using volumetric measures for both inputs and outputs, which does not tell us anything about input prices or the actual outcomes delivered as a result of the inputs, means that it is extremely difficult to compare this apparent poor performance with that achieved in the market sector of the economy. Nevertheless, it is instructive to compare this fairly stagnant productivity with a couple of measures of market sector productivity growth. Van Reenan et al (2011) have previously estimated that labour productivity in the UK grew by 2.8% per year between 1997 and 2007, whilst the total factor productivity component of this is estimated at 1% growth per year (though admittedly, these productivity measures would have now fallen in the wake of the crisis).

When compared with these growth rates, the public sector’s productivity performance looks poor. Nevertheless, one might not be surprised by the result, given that so much money was being thrown at these services over this period.

In order to gauge the usefulness of these productivity calculations, we can examine the provision of health services.

These three categories of output are then weighted according to the expenditure share on each. Overall output increased by 88% between 1997 and 2010. The further inclusion of various quality measures raises this output gain to 97% over a period in which inputs increased by 86%. Therefore, overall productivity was found to have risen by 6.2% over the period. 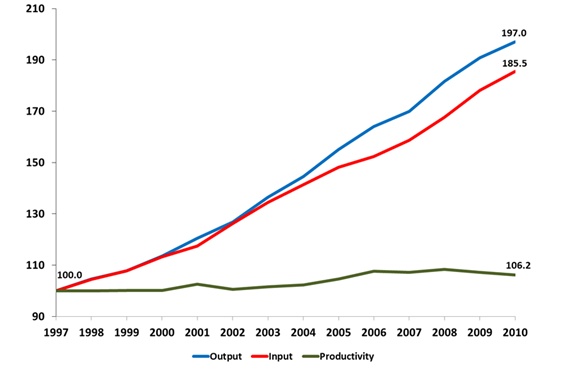 But there are obvious problems with this methodology, especially where healthcare is concerned.

The first is that this measure in no way recognises the huge increases in real spending we saw over this period (up 107%, from £59bn to £124bn in today’s prices). This shows how the real cost of inputs, like doctors’ salaries and treatments, increased markedly – meaning that the productivity calculation, as the ONS itself admits, is a poor guide if you are interested in value for money.

The second is that at least part of the observed increase in productivity is being driven by the huge increase in prescriptions (up 205%). Though these only make up a small proportion of the overall weighting of output (12%), the scale of the increase is significant. It seems more obvious that HCHS and FHS could be seen as ‘outputs’ from healthcare, but though the ONS does not purport to measures outcomes, to include prescriptions as an output is questionable: for is not an increase in the number of prescriptions as likely to be reflective of a deterioration in health outcomes as an improvement?

Finally, the non-NHS services component of output just assumes that productivity is constant – i.e. for these services, input is equal to output.

In order to come up with a measure of output value-for-money in healthcare, and thus highlight the role of real input cost increases over the period, we can construct a new productivity index which strips out prescriptions and uses real expenditure on healthcare as the input measure. 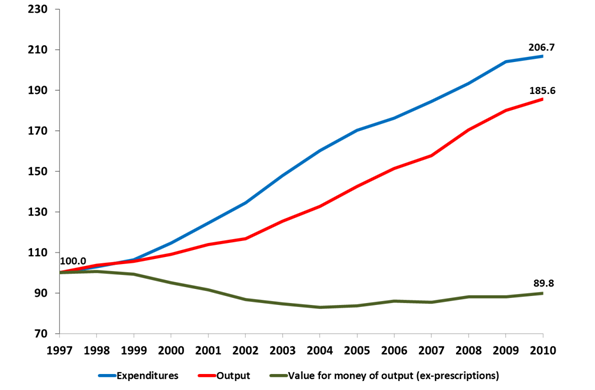 Excluding prescriptions, and re-weighting accordingly, output went up by 86% between 1997 and 2010. Real expenditures increased by as much as 107%. Therefore our ‘value for money’ index actually shows a decline of over 10% over these 13 years.

There are many reasons why value-for-money in the NHS might have fallen over the New Labour years, including the extraordinary increase in GP salaries, and the growth of the managerial culture. But at least part of the explanation for the phenomenon is likely to be due to the economic concept of Baumol’s cost disease. Service industries, such as public services, tend to find it more difficult to find ways in which to improve productivity than, say, manufacturing, where mechanisation can have large effects. Wages in areas which experience strong productivity growth tend to increase significantly over time. But labour intensive service industries such as healthcare and education then have to compete for labour in the same labour markets – meaning that costs tend to increase significantly even as productivity remains stagnant, thereby increasing the cost of the given healthcare output.

But other research, whilst acknowledging the cost disease component, has suggested that other factors – which can be more directly controlled by policymakers, are more significant. The rapid roll out of new healthcare technology is another factor.

Regardless of the precise mechanisms, the key finding is that the real cost of healthcare inputs is ever increasing and with stagnant productivity this would require ever increasing expenditure (which has grown much faster than money GDP since 1997) and thus a higher tax burden, diminishing incentives.

What can be done?

The degree to which you consider this cost disease in public service provision a problem then largely depends on whether you are optimistic or pessimistic about future growth prospects, and whether you are concerned about an ever-increasing tax burden.

If our economy returns to the previously usual trend growth, then ever increasing spending on education and healthcare will be affordable, but only with an ever increasing burden of taxation. For those who believe that tax rates have key effects on incentives, this is problematic.

If we are to avoid this ever increasing tax burden then, we must find means of improving productivity in the provision of public services. Down the track it is easy to imagine that technology might have a much larger role to play in the provision of both healthcare and education, for example, making it much less labour intensive. But for the foreseeable future, these industries are likely to continue to be characterised by personal care and traditional teaching methods. In light of this, other avenues to improve productivity must include: enhanced competition to keep costs from spiralling, constant attempts to eliminate unnecessary bureaucracy and freedom for doctors, healthcare professionals and schools to innovate in the use of new technology.

The gains to significantly improving public sector productivity could be large – and so it’s essential when we talk about the subject, we understand what the figures produced by the ONS actually show, and what they omit. It will be fascinating to see how these figures change going forward, as the restraint in spending kicks in.