The only way is Heathrow

This article is an excerpt from the CPS Growth Bulletin, authored by Ryan Bourne and Tim Knox. To read the full article, click here. To sign up for our mailings, use the form on the left of our newsletter page.

This week, the Centre for Policy Studies published what we believe would be the most cost-effective and robust solution to this capacity crunch. A paper by Jock Lowe and Mark Bostock suggests that expansion of Heathrow is the only sensible option. Their plan is to turn Heathrow into a robust hub – with almost double the current capacity at no public cost. Developed in phases, it would provide an integrated rail, road, and air transport solution. It has been submitted for consideration by the Davies Commission.

Heathrow is currently estimated to contribute about 1% of UK GDP. It retains the highest connectivity score amongst major European hubs, and despite being at near capacity, other UK airports have failed to develop long-distance routes on any significant scale to augment Heathrow. Instead there has been a 49% increase between 2005 and 2011 in the number of passengers flying from UK regional airports to overseas hubs.

Heathrow remains the largest freight port, with £35bn worth of goods passing through each year. Should the strain on its runways continue to increase, this will be disastrous for foreign investment. Heathrow’s location also has certain climatic and topographical advantages which a Thames estuary airport may lack, such as minimal cross-winds, fog, snow and bird strikes. And this is before we even mention the huge sunk costs in terms of investment that has already gone into the site.

WHAT DOES THE HEATHROW HUB ENTAIL?

Heathrow Hub would retain the two existing runways, and take advantage of the simple fact that these are much longer than required for modern aircraft. Both runways would therefore be extended at one or both ends, and divided by an intermediate safety zone to comply with mandatory safety codes, as in the figure below.

Each existing runway becomes two separate, in-line runways – one for aircraft landing and one for taking off. The M25 motorway would be diverted or possibly bridged where crossed by runway and taxiway extensions. 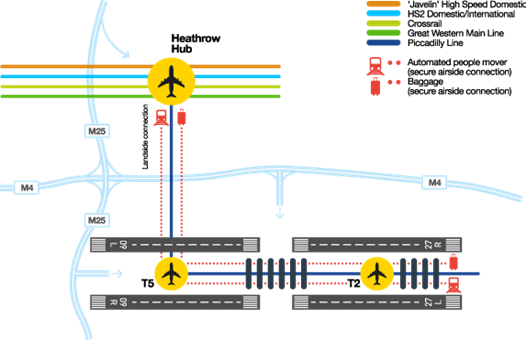 This allows each runway to be used simultaneously, providing, in its ultimate phase, a doubling of slots. This would meet all foreseeable demand and create enormous flexibility for noise mitigation and runway alternation. Construction could take place in phases. One option would be to extend the northern runway first, with construction of the southern runway following as and when required. This would be coordinated with development of the Heathrow Hub transport interchange to provide the necessary surface access improvements and, by relocating some land side facilities from Heathrow’s constrained site, release space for larger numbers of aircraft.

There are also environmental benefits, including reduction of delays and ground hold times. Making best use of existing assets is also likely to be far less carbon intensive than constructing an entirely new airport and its associated transport as well as ancillary infrastructure. What’s more, extending existing runways in this way brings no new areas into the noise footprint.

In order to make Heathrow a world-class multi-modal transport hub, the Heathrow hub proposal would also develop a new interchange two miles north of Heathrow’s current Terminal 5. The aim of this would be three-fold: 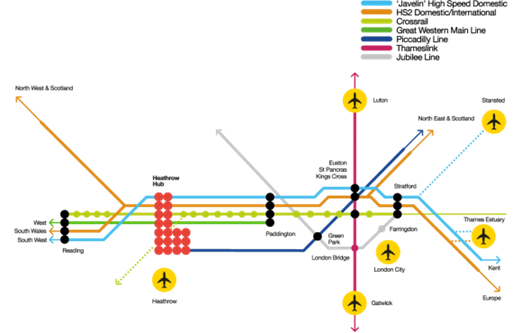 A major part of the development is improving access. Maintaining a large catchment area is crucial for the economic viability of the Hub. This development could occur in three Phases: 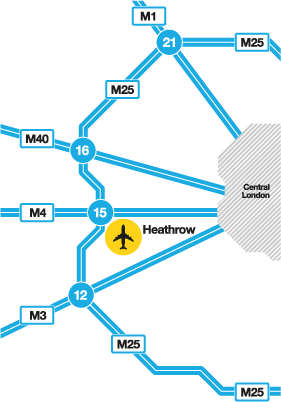 The capital cost of this proposal would be far lower than all the other options being considered. In addition, the phased nature of the proposals allows capacity to be matched with demand. This increases affordability and reduces the commercial risk inherent in “all or nothing” proposals for entirely new infrastructure. Constructing a new terminal and surface access infrastructure outside the existing congested operational airfield also significantly reduces capital costs.

The authors estimate, for example, that Lord Foster’s Thames Hub would cost £65 billion in development. In contrast, the authors estimate that the Heathrow Hub would cost just £10 billion. They calculate that, under this Hub scheme, the average airport user charge would be only £24 per passenger (compared to Heathrow's current £18), whilst Lord Foster’s Thames Hub proposal would require a charge of at least £62 (a figure which would be even higher for Boris Island).

With economic growth in the UK being held back by the shortage of airport capacity in the South East, and by the uncertainty over how this will be resolved, Jock Lowe and Mark Bostock demonstrate that “Heathrow Hub” has five main advantages:

It is vitally important that we end the uncertainty over the future of Heathrow as soon as possible to boost business confidence and further attract investors. It must also be made in time to allow plans for HS2 to take into account the location of the new air hub – and have the main line directly connected with it.

This article is an excerpt from the CPS Growth Bulletin, authored by Ryan Bourne and Tim Knox. To read the full article, click here. To sign up for our mailings, use the form on the left of our newsletter page.