We cannot afford an anti-business agenda

Recently released data on GDP and employment continue to show improvements in economic conditions. The preliminary estimate for Q4 2013 released by the Office of National Statisticsshows that GDP rose in volume by 0.7% over the previous quarter. This translates into:

Output increased in three of the four main industrial groupings within the economy in Q4 2013 compared with Q3 2013.

However, in Q4 2013 GDP was estimated to be still 1.3% below the peak in Q1 2008. Labour market conditions have continued to improve with a fall in the unemployment rate to 7.1% and a very strong increase in employment of 280,000 in the three months to November.

RECOVERY STILL HAS FAR TO GO

Yet despite the good news how fragile is the recovery? We can get an indication of this by looking at the relative performance of the main components of output – such as production and services – over time in previous economic downturns. This analysis shows that despite the encouraging news from the latest GDP estimates, there is more work to be done to secure the recovery. Moreover, productivity remains a source of concern and is underperforming internationally. What the economy needs is a series of pro-productivity measures rather than the uncertainty arising from the anti-business agenda currently espoused by Ed Miliband’s Labour party.

The UK has experienced at least four recessions over the last forty years. The path of real chained output shows that the period 1973-75 witnessed a double-dip recession. This experience has been averted in the latest downturn but what is clear from the data and the subsequent quarters of GDP volume following the recessions is that not only was the 2008-09 downturn deeper than the others, but the recovery has been the weakest of all in comparison. 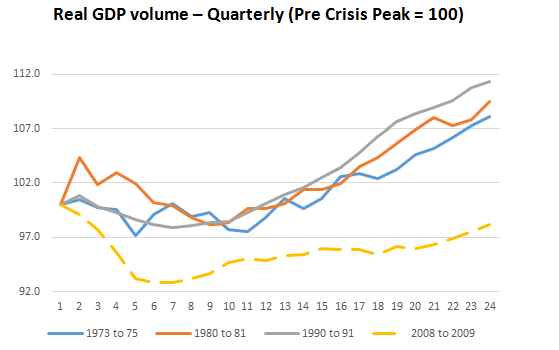 This picture of a slow recovery is confirmed by looking at movements in the index of production. It is also possible from this data to identify the quarters when industrial production reached its nadir in each recession, Q3 in 1975, Q1 in 1981, Q1 in 1991 and Q3 in 2009. Rebasing the production index to 100 using this level as a floor permits the measurement of the path of an economic recovery at a more disaggregated level than shown by total GDP. 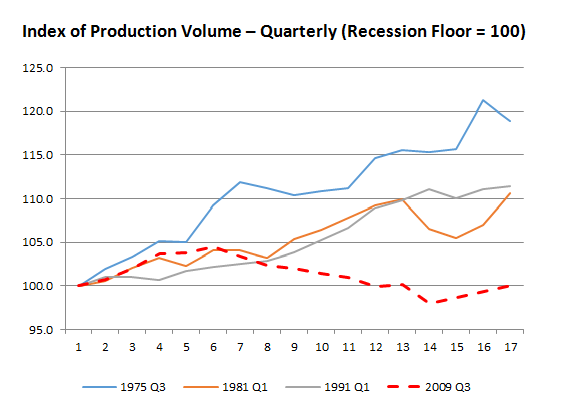 This production data is more volatile than GDP data but in the case of the most recent downturn the index of production rose for four quarters and then stalled in Q1 2011. Although the UK avoided a double dip recession, in terms of the volume of production the evidence is that production fell again after an initial recovery starting from Q3 2009 and did not begin to rise again on a sustained basis until Q3 2012.

Since there was an election broadly separating these two periods we can split the current weak recovery in GDP from the time of the financial crisis into two parts to consider the impact of the change in the administration of the economy and the public sector in 2010. Using monthly production statistics it is only possible to compare four output recoveries: from May 1981, April 1991, September 2009 and October 2012. 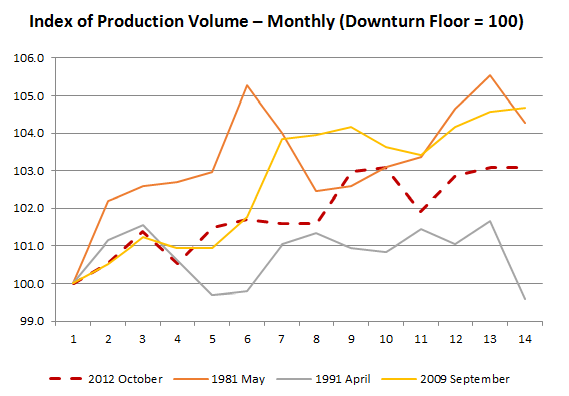 The evidence this time shows that the current recovery is weaker than the growth in output after the trough of September 2009 and of May 1981. However, the production recovery is certainly not the weakest in recent history and is stronger than that starting after April 1991.

Production and services constitute currently around 93% of GDP. While in Q4 the volatile construction sector actually fell by 0.3%, this activity accounts for only 6.3% of GDP. Applying the same split period analysis to the important services sector which has a 77.8% weight in GDP volume shows that the economic recovery in this sector has been consistently stronger under the current Government than during the Labour recovery period. This is based on the monthly index of services volume data, although using the production recession trough periods September 2009 and October 2012 as the base months for comparative purposes.

The services index figures for November 2013 show a 2.6% increase over the year. 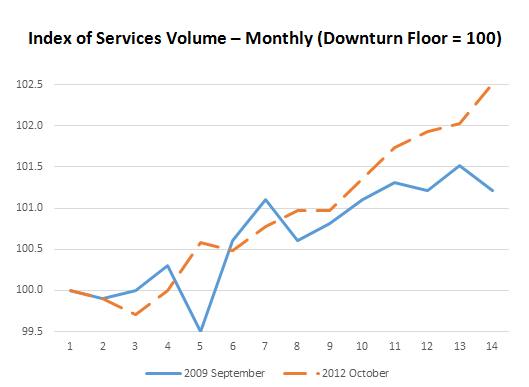 The relative strength in the volume of services output growth under this Government compared to under Labour must be partly due to the necessary rebalancing of the economy between the public and private sectors that has happened since the election. During the financial crisis and its immediate aftermath, public sector employment rose 5% from 5.99 million in March 2008 to 6.31 million by March 2010 which would have produced an unsustainable rise in the public sector wage bill.  In sharp contrast, the number of employees in the public sector was down to 5.67 million as of September 2013. At the same time the rate of unemployment stayed stubbornly high at 7.9% through the first twelve months of the first recovery period while during the second it has fallen from 7.7% to 7.1% for September to November 2013.

A return to long-term growth in the British economy and future rises in living standards depends ultimately on rising productivity. It is well documented that while unemployment has been falling and output rising in the current economic recovery, labour productivity has not improved and it remains 4% less than the pre-crisis peak in Q1 2008. In 2013, productivity seems to have edged up slightly but it fell again in Q3 2013.

But there is more to productivity than output per hours worked which will rise or fall in any industry as a consequence of the quantity and efficiency of capital employed per worker. A Bank of England paper has demonstrated that future low inflationary growth requires more of the ‘secret sauce’ that fuels growth, a rise in the effectiveness with which all factors of production are utilised. The amount of this sauce, known as Multi-Factor Productivity (MFP) or Total Factor Productivity (TFP), in an economy is complex to estimate, but there is an extensive international effort to calculate it across countries and over time. The concept is based on the work of Nobel Laureate Robert Solow who showed that the growth in economic output can be decomposed into contributions from growth in labour inputs (in terms of both its quantity and composition) and from growth in capital services. The residual output growth remaining unaccounted for by growth in labour and capital inputs is an estimate of MFP or the ‘Solow residual’. This residual can be thought of as capturing technological progress, including the effect of changes in management, business processes and the impact of supply-side reforms.

The bad news from the perspective of the UK economy is that the most recent evidence up to the end of 2012 suggests that the contribution of MFP to output growth has been negligible or negative since 2007. This is the conclusion of the latest growth accounting exercise carried out by the ONS for the years between 1998 and 2012. 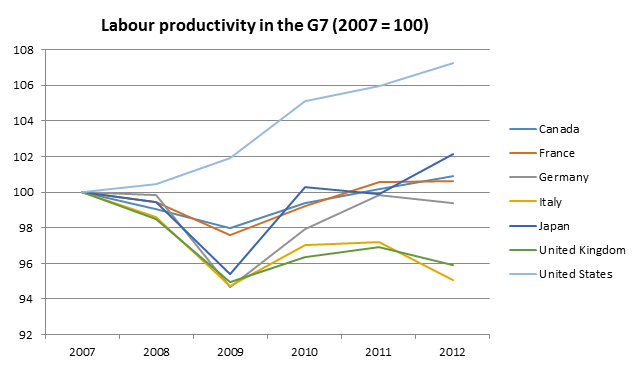 In order to return to more robust productivity growth, we need a series of supply side reforms to boost competition, encourage investment and reskill our workforce. However, policy announcements from the Labour party to increase regulation and taxes have developed into an anti-business agenda. Not only does this agenda pose a risk to the recovery if they were enacted but it is creating difficulties for businesses now which need certainty to make long term investment decisions.

As CPS author Tim Morgan has written in a recent blog, “It’s worth remembering quite how wrong Labour has been about the economy”. The danger now is that its anti-business rhetoric could, by undermining business confidence, cause real damage to the recovery. So here are seven non-ideological pledges which the Labour party could make to show that it is fully behind a sustainable recovery.

Labour’s agenda has also covered many other areas such as transport and banking as well as support for higher income taxes. However, by committing to these seven pledges Labour might go some way to reducing the potential harm of these policies. The party might also provide confidence to business and consumers that it will not damage some of the longer term reforms made by the current Government.

This article is an excerpt from our Growth Bulletin, written by Ryan Bourne and Tim Knox. To read the full article, click here. To sign up for our mailings, use the form on the left of our newsletter page.