Productivityâs Lost Decade â And How To Avoid Another

Strong GDP and employment growth throughout 2013 has highlighted productivity’s continued weakness. At the onset of the recession in Q1 2008, productivity initially fell. However, it has not recovered and remains 4% below the pre-crisis peak on an output per hour basis. Productivity has now fallen back to where it was in Q4 2005. Without improvements, we will have lived through almost a decade of stagnant productivity. 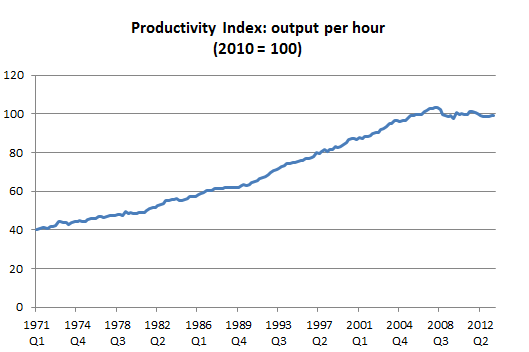 The average annual growth in productivity between Q1 1971 and Q1 2008 was 2.6%. If it had continued on this trend, then productivity would be 20.5% higher than it is now. This is to say that for every hour worked in our economy, we would be producing 20.5% more output if we had not experienced this stagnation. 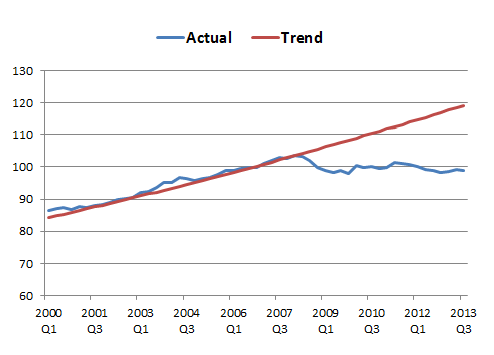 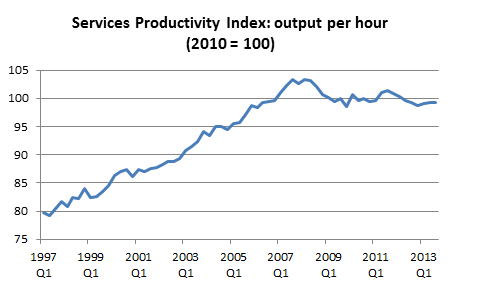 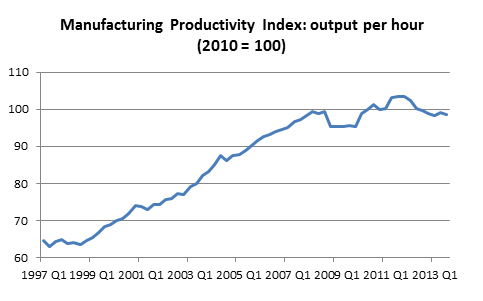 Between 2001 and 2007, labour productivity measured as output per employed person rose by 14.1% in the UK, more than any other G7 country. However, as was mentioned in last fortnight’s Growth Bulletin, since 2007 UK labour productivity has underperformed. Relative to productivity in 2007, only Italy had a worse decline than the UK. 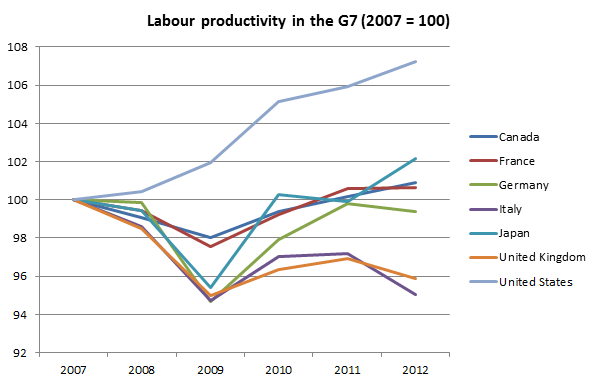 WHY IS PRODUCTIVITY SO WEAK?

One explanation for this poor productivity is ‘labour hoarding’ as firms hold on to workers in the expectation of a swift economic recovery. Given that the economy is now six years on from the pre-crisis peak, labour hoarding seems unlikely to be the main cause of low productivity. It also seems inconsistent with a downturn in which firms with impaired access to working capital look to cut variable costs including labour. Labour hoarding is futile if you go out of business before economic growth returns. Moreover, as Philip Rush at Nomura has said, “It's one thing to argue that firms are holding onto staff to be in a better position for the recovery. It's another thing to argue they actively went out and hired in anticipation of a recovery that they feared wasn't about to come.”

The weakness of productivity may also be a temporary cyclical phenomenon because some companies will have continued to use their factors of production despite a fall in their output. The classic example would be estate agents who continue to work even though the number of transactions has decreased as the number of prospective clients has fallen. This would imply a cyclical rebound in labour productivity when demand recovers. However, this explanation is unlikely to give the complete picture because productivity has remained disappointingly stagnant throughout 2013 despite robust growth in aggregate demand.

It has also been argued that the contraction of the UK’s financial services and oil and gas sectors has caused lower labour productivity within those sectors. as well as a shift in employment to more labour-intensive, slower-growth sectors. Some argue this means employment growth has been driven by low skilled and low productivity jobs causing the economy wide weakness in productivity. However, the analysis of the IFS is that such structural changes to the economy cannot really explain much of the fall in labour productivity. It also argues that one of the key reasons for the weakness in productivity is the fall in business investment which has led to a reduction in the quantity and quality of available capital. Less capital per worker is likely to lead to a diminished labour productivity. This seems reasonable given ONS data shows gross fixed capital formation across the economy fell sharply but has remained stagnant since Q3 2009. 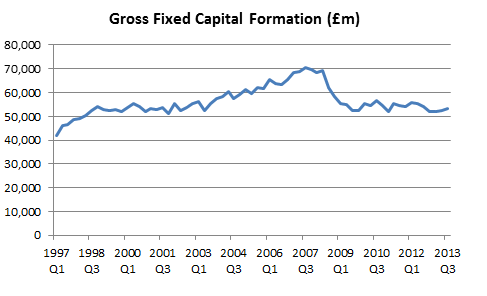 On the other hand, a recent paper by Tomohiro Ota at the Bank of England argues loan forbearance - whereby banks do not liquidate non-performing loans - impairs the allocation of capital. They do this because realising loan losses would reduce their capital ratios below the regulatory threshold. Banks know they will have to liquidate these loans at some point so they reduce new lending. The result is that unproductive companies have not exited the market to be replaced by productive new start-ups. However, a separate Bank of England paper argues that whilst productivity in SMEs in receipt of bank forbearance is approximately 40% less, overall forbearance can only explain a small part of the total fall in productivity.

Another argument we set out previously is that the impaired allocation of capital resulting from the financial crisis has been exacerbated by ultra-loose monetary policy. This has allowed the survival of unproductive “zombie companies”, and the slowing of deleveraging in less productive sectors and an acceleration of deleveraging in more productive sectors. The process of creative destruction has effectively been inhibited. In its recent paper on loan forbearance, the Bank of England agrees with the view that low interest rates are more likely to be causing the impairment in market entry and exit.

However, Chris Williamson at Markit argues that ONS data has actually systematically overstated employment growth over the last few years. If this is the case, productivity may not have performed so poorly. Nevertheless, the ONS response that their data is robust because it includes all forms of employment, including self-employment, seems persuasive.

WHAT WE NEED TO DO

According to a Bank of England paper from 2012, the weakness in productivity until that point had been concentrated in the service sector as well as the energy sector. The paper argues growth in the supply capacity of the economy since the crisis has been weak. This seems to match the underperformance of services sector productivity relative to manufacturing which has been highlighted earlier in this paper. Furthermore, an ONS study of UK productivity up to 2010 uses firm-level micro data to suggest that services sector productivity in particular has underperformed. The study also shows that in 2010 labour productivity performance was weaker in smaller firms than larger firms, and that firms that export and have higher levels of ICT maturity had systematically higher productivity performance.

As a paper by Uppenberg and Strauss from the European Investment Bank shows, services sector productivity can be increased through higher fixed capital, new technology, higher skill levels and innovation through interaction with customers, suppliers and competitors.

In order to increase productivity and the underlying growth potential of the economy, we therefore need an ambitious set of supply side reforms to remove barriers to growth and investment as well as an eventual return to sound money. The Government should embark on a programme of deregulation, tax reform, infrastructure improvements, increasing competition and skills alongside freeing businesses to innovate and export.