Productivity is still the key weakness

This article is an excerpt from our fortnightly Growth Bulletin, written by Adam Memon and Tim Knox. To read the full article, click here. To sign up for our mailings, use the form on the left of our newsletter page.

Data published by the ONS on Wednesday showed the labour market continues to perform strongly. Total employment has now reached 30.39 million; an increase of 2.3% on the year before and 1.46 million since May 2010. Crucially, this increase in employment is not being solely driven by population growth - the employment rate has seen a sharp rise to 72.6%, a level not seen since mid-2008. The unemployment rate also fell below 7% which had previously been the threshold set by the Bank of England (subject to a few caveats) at which point it might consider embarking on a path of monetary policy normalisation. The number of unemployed people has fallen by 12.5% over the last year.

It is clear that the sustained improvements in the labour market are more than simply a cyclical rebound. Even before the latest data was released, the OECD comparison of employment rates showed that since Q1 2011, the UK employment rate has grown a full percentage point more than the OECD average. The inactivity rate fell to 21.9%, the lowest it has been since 1990. This sharp fall must to some extent reflect the impact of welfare and tax reforms which have encouraged people to enter the labour market. 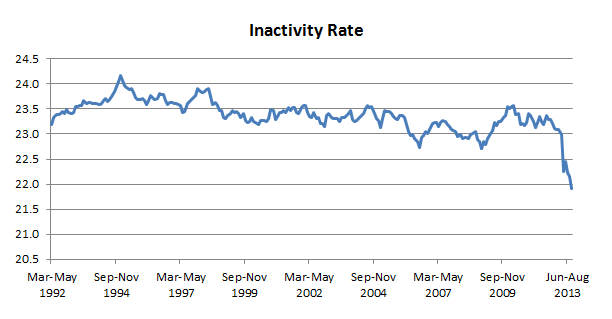 Nominal wage growth also increased to a 3 month average of 1.7% compared to last year. Month-on-month nominal wage growth was 1.9%, which suggests acceleration in the coming months. Some commentators highlighted the fact that without bonuses, regular pay grew by 1.4% and thus was less than the 1.6% CPI inflation for March - the suggestion being that bonuses in the City make the wages data seem better than they actually are for most people. This argument does not carry much weight because the biggest increases in bonuses over the year came from construction and manufacturing which grew by 10.2% and 12.8% respectively. Bonuses in Finance grew by only 1.1%. Whilst bonus levels are not equivalent across different industries, it is still important to consider them.

There are other signs of tightening in the labour market; vacancies for example rose to 611,000 which is the highest number since August 2008. Consequently, it seems quite likely that nominal wage growth will continue over the short term. Sterling appreciation and the lack of commodity price spikes mean the immediate outlook for inflation is relatively sanguine. As a result, short term real wage rises are likely to continue.

Despite this strong employment data, it is productivity (as we have mentioned previously) which determines economic growth and real wages in the medium and long term. Despite a small increase in output per hour of 0.3% in the last Quarter of 2013, productivity has continued its unprecedented stagnation. Across the whole economy, productivity is still 4.3% below the pre-crisis peak and if it had continued growing at the pre-crisis trend, it would be 20% higher than today. 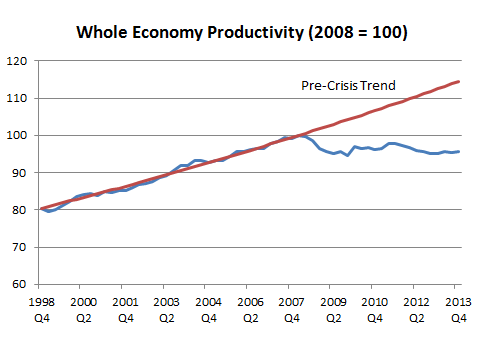 Particularly concerning is that productivity has not recovered with output. If its persistent weakness was purely the result of demand-side factors, it should have recovered with output. There should be some cyclical upturn but the fact that 1.7% growth in output in 2013 was matched by only 0.7% growth in productivity shows that supply side issues dominate. The pre-crisis quarterly trend growth in output per hour was 0.6%. Furthermore, 16 of the last 25 Quarters have seen contractions in productivity and it is now at the level it was in Q1 2006. The OBR has accepted that productivity has been “exceptionally weak” and it is clear their assumptions in 2010 and 2011 of it having 2% annual growth throughout this Parliament were wildly optimistic.

The pre-crisis trend rate of growth in manufacturing productivity was 1.16% per quarter which was almost double the trend rate for the whole economy. Whilst manufacturing productivity has marginally outperformed the rest of the economy, it is still only at Q3 2008 level. If it had continued to grow at the pre-crisis trend, it would be 30% higher than today. 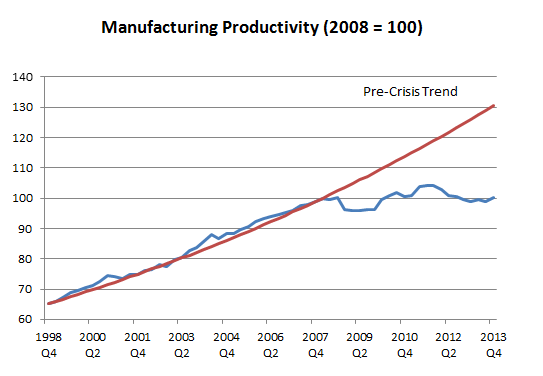 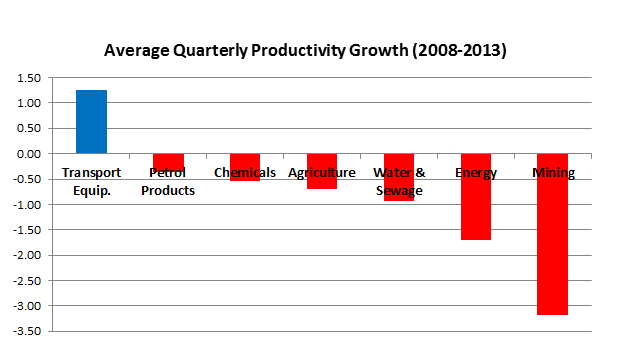 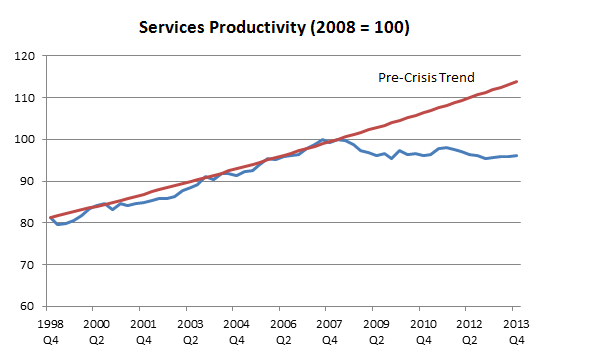 Looking at separate industries within the services sector also shows big differences. Finance and Real Estate have shown sustained contractions in average quarterly productivity between Q1 2008 and Q4 2013; they fell by 0.62% and 0.45% on average per quarter. The ONS also estimates that productivity within Government Services fell by an average of 0.28% per Quarter over the same period. In contrast, Administration and Support services grew by an average 0.36% per quarter. An increase of 0.36% would normally be regarded as a little sub-par, relative to the rest of the sector it is a healthy growth rate. 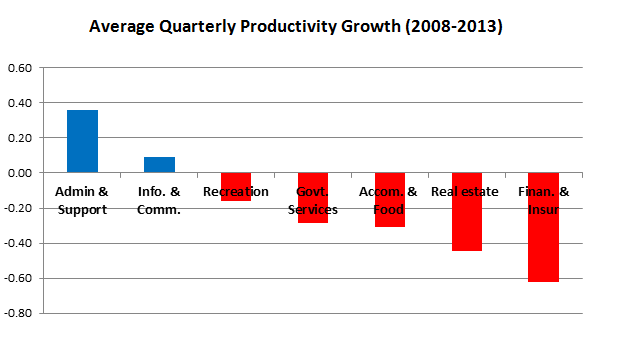 The ONS also allows us to place these industries into some context by giving estimates for output per hour in pound terms. The four-quarter average of output per hour in 2013 in the Mining and Quarrying sector for example was £234. In Real Estate this was £177 and in Finance this was £66 compared to £22 in Government Services. We must be cautious in using these figures, especially with regards to the estimated output per hour in Government Services. Nevertheless the data does highlight that Mining, Real Estate and Finance for example, which suffered some of the biggest falls in productivity, are also still among the most productive industries in relative terms. 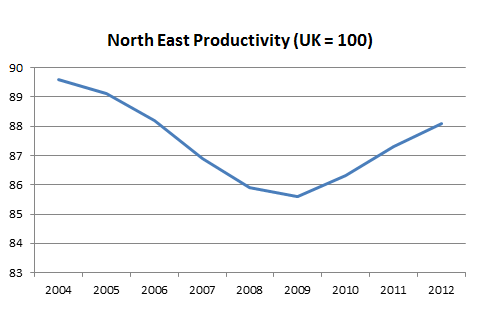 In the South West, productivity relative to the UK has remained on a downward trend since 2004 and the onset of the financial crisis appears to have had little effect. In London, productivity relative to the UK has been almost the exact inverse of the North East. Between 2004 and 2009 it increased and since then has gradually fallen. It is also important to note productivity in London is still 33% higher than the UK average, whilst in the North East it is approximately 12% less than the UK average. 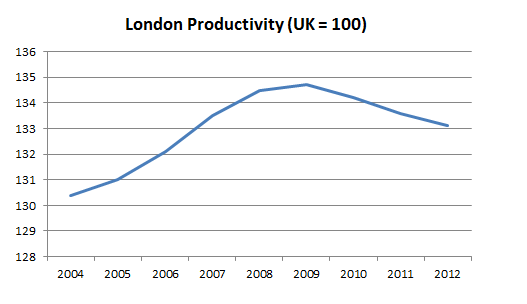 The relative underperformance of London since 2009 is consistent with the poor performance of finance and real estate. This suggests the structural changes in the economy since 2009 are an important explanation of the collapse in productivity. Furthermore, as increasing regulation restricts the scope for expansion in finance for example, it would seem the capacity for significant productivity gains is severely limited.

It is unlikely the UK economy will be able to quickly return to robust productivity growth due to deep-seated supply side constraints. Nevertheless, the Government can still take more action to boost productivity through far-reaching tax and regulatory reform alongside refreshed competition and infrastructure policies and more ambitious education reform. Permanently weaker productivity is not inevitable.

This article is an excerpt from our fortnightly Growth Bulletin, written by Adam Memon and Tim Knox. To read the full article, click here. To sign up for our mailings, use the form on the left of our newsletter page.