Britainâs Deteriorating Energy Security and Why We Must Frack

This article is an excerpt from our Growth Bulletin, authored by Adam Memon, Angeliki Terpou and Tim Knox. To read the full bulletin, click here. To sign up for our mailings, use the form on the left of our newsletter page.

Renewed concerns over European energy dependency on Russia means the question of energy security is high on the list of priorities at the G7 in Brussels. Energy security should be measured according to the diversity of sources of supply and dependence on imports from volatile countries.

In 2013, the UK’s total energy production fell by 6.5% from 2012 mainly due to falls in the production of oil, coal and natural gas. According to the Department of Energy and Climate Change (DECC), the UK’s net energy import dependency climbed to 47%, the highest level since 1975, and energy exports reached their lowest level since 1980. The free trade of energy is of course desirable but it is also clear the health of European economies is vulnerable to disruptions in energy supplies caused by geopolitical disturbances. Increasing the security of energy supplies is therefore important to the UK’s economic well-being.

The Wood Review estimates Britain has extracted around 42 billion barrels of oil so far from the North Sea and that a further 12 to 24 billion could potentially be extracted. However the Oil and Gas journal argues in its latest issue that the UK’s proved oil reserves amounted to less than 3 billion barrels. According to DECC in 2013, the UK produced 0.9 million barrels of oil per day and consumed 1.49 million. Data from the US Energy Information Administration (EIA) demonstrates the decline in liquid fuel production in the UK between 2000 and 2013 as well as the continued decline after changes in the tax regime in 2011. In 2012 crude oil was mainly imported from Norway (50%), Africa (26%) and the Middle East (21%). 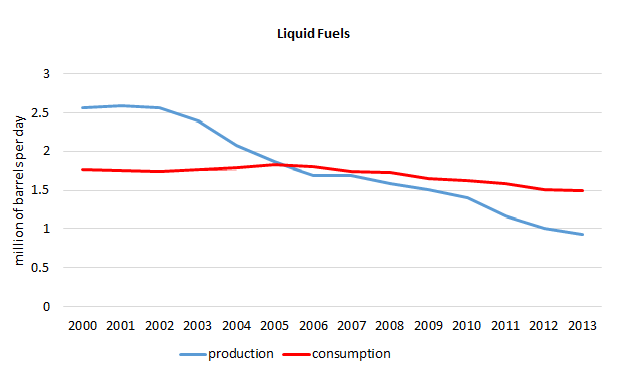 The Oil and Gas journal estimates the UK’s proven natural gas reserves were as high as 8.6 trillion cubic feet. According to DECC, in 2013 the UK produced 1.24 trillion cubic feet of natural gas and consumed 2.7 trillion. Data from the EIA shows the decline in natural gas production between 2000 and 2013, which seems mainly due to the fact that the discovery of new reserves and new production has not kept pace with the maturation of existing fields. According to DECC's 2013 Natural gas imports and exports review, the majority of imported natural gas came from Norway (58%), Qatar (19%), Netherlands (16%) and Belgium (7%). 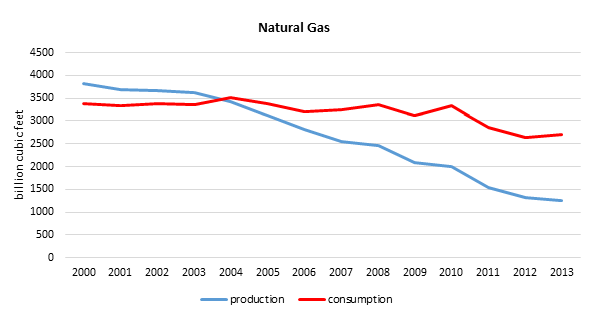 The UK’s possible, probable and proved deep coal reserves are estimated to be 2.3 billion tonnes and surface coal reserves were 852 million tonnes. Deep coal mining in the UK is coming to an end, as shown below, with production in 2013 reaching a meagre 12.8 million tonnes according to DECC. Overall the total consumption of coal was 60.1 million tonnes in 2013. DECC reports that the majority of steam coal was imported from Russia (45%), Colombia (26%) and the US (22%). Russia was the source of 41% of total coal imports.

In the richer parts of the developed world coal has become unfashionable due to the emissions of carbon dioxide but this does not change the fact that coal remains one of the main fuels in the UK’s electricity generation; more than one third of electricity generation has coal as its source. The UK’s coal industry has shrunk largely due to international competition but CPS Research Fellow Tony Lodge argues that deep Underground Coal Gasification (UCG) technology could in the future be used to reach vast stranded coal reserves. The UCG is a technique by which coal is converted into a fuel gas below the ground; the gas can be processed to remove carbon dioxide before it is passed on to end users. The UK coal authority also believes UCG has the potential to provide a clean source of energy where traditional mining techniques are uneconomical. 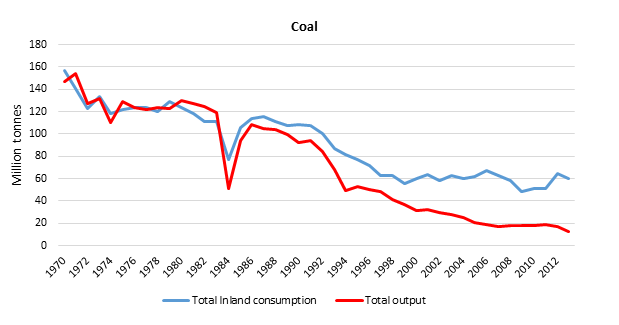 The government should reform the overly complicated and uncompetitive fiscal regime for the exploration and production of oil and gas in order to increase energy production and overall energy security. According to DECC in 2013 tax revenue from the oil and gas sectors accounted for about 15% of UK corporate tax receipts. DECC reports that in 2012-2013 tax revenues from UK oil and gas production dropped by around 45% to £6.1 billion, and fell again in 2013-14 by around 25% to £4.7 billion.

The tax regime that applies in the exploration and production of the UK’s oil and gas has three elements: the Ring Fence Corporation Tax (RFCT), the Supplementary Charge (SC) and the Petroleum Revenue Tax (PRT); until 2002/03 there was also revenue from royalties. The RFCT is the standard corporation tax that applies to all UK companies with the addition of a ‘ring fence’ and is currently 30%. 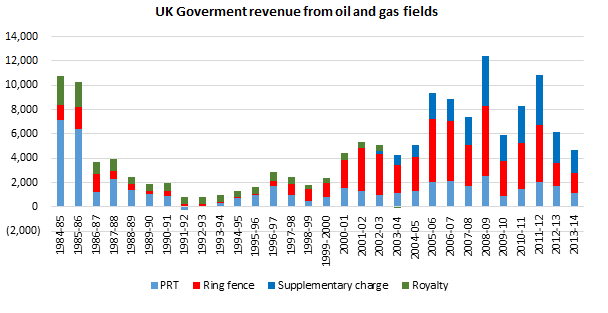 The RFCT offers the opportunity of a tax free allowance in the first year for all capital expenditure and is designed in such a way to prevent the reduction of taxable profits from other business activities. In 2011 the government introduced a brown field allowance for incremental projects in existing fields and a £3 billion field allowance to support investment in the West of Shetland. The Ring Fence Expenditure Supplement was also introduced for companies that do not yet have sufficient taxable income for the RFCT.

In March 2011 the rate of the Supplementary Charge (an addition to the corporation tax) increased from 20% to 32%. The PRT is a field-based tax that charges the profits from the production of oil and gas which were sanctioned before 16 March 1993 and is currently set at 50% after a series of allowances. As the EIA explains, the marginal tax rate for fields that are subject to the PRT has increased to 81% of their profits from 75%, fields that are not subject to the PRT now pay a 62% tax which is up from 50%; qualifying new fields pay 30% of their profits.

The tax regime appears to be ‘chasing’ increases in the oil price and changed three times in 9 years. The 2011 tax increase was considered a short term deficit reduction measure although revenue has in fact fallen alongside production in the last two years. The EIAargues higher tax rates have made UK oil fields less competitive, when they were already strained by high operating and decommissioning costs. After the implementation of the new tax regime concerns have been raised about the cost of development of several oil and gas fields including Chevron's project on the Rosebank field and the Statoil project on the Bressay field. 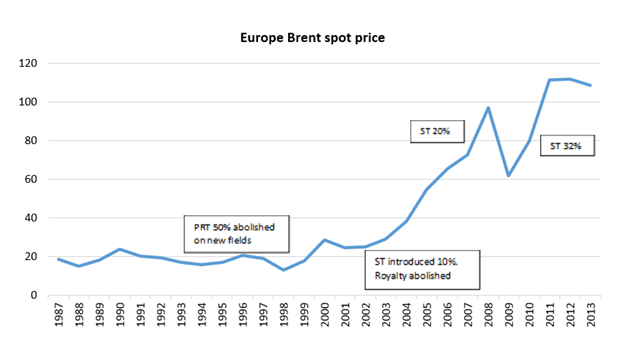 According to an Oil and Gas Activity Survey, operating expenditure rose by 15.5% to an all-time record of £8.9 billion in 2013 and is anticipated to rise further to around £9.6 billion in 2014. In addition, the average unit operating costs have risen to £17 per barrel of oil equivalent, while the number of fields with an operating cost greater than £30 per barrel of oil equivalent has doubled in the last year.

The Government should therefore set a longer term aim to make the fiscal regime for offshore oil and gas simpler and more competitive because the higher marginal tax rates of 62% and 81% on oil and gas production might have inhibited production. Whilst further analysis would be required, it is quite possible the higher rates have not yielded much, if any, increase in revenue - even when taking into account falling oil prices.

The measures in the 2014 Budget to cut the tax rate on ultra-high pressure, high temperature projects from 62% to 30% are a good step. The estimated £13.5 billion increase in investment in the North Sea following the reduced tax burden on large and deep fields should act as a spur for further cuts in the cost government adds to energy production.

WHY WE MUST FRACK

DECC data shows that, in 2013, coal was the source of 36% of UK electricity generation, gas contributed 27%, nuclear 19%, renewables 15%, and others contributed 3%. Given the fall in domestic energy production, the rise in the UK’s energy import dependence and our particular reliance on Russia for coal imports, it is vital we find ways to secure our supplies of energy.

Fracking is the procedure of drilling deep into the earth before a high-pressure water mixture is directed at the rock in order to release the gas inside. The UK’s shale gas reserves are not yet known but according to a British Geological Survey (BGS) that was released in July 2013, the Bowland Shale alone was estimated to have around 1,300 trillion cubic feet of gas. Even if the UK’s reserves are not as high as is currently thought, shale gas can still be a tool to help reverse the decline in energy production.

There are also important environmental reasons to support fracking. As is made clear in a CPS report, “Why every serious environmentalist should favour fracking”, the extraction of shale gas can be used to help fight against the terrible PM2.5 air pollutant from which more than 3 million people die a year. As Tony Lodge, argues, recent announcements that companies such as Total and Centrica are investing in British shale exploration are a significant confidence boost to an industry facing severe opposition from a number of vested interests.

The development of new energy supplies in the UK is decreasingly related to what happens below the ground and increasingly influenced by the regulatory framework, fiscal regime and technological developments above the ground. Setting an energy policy which chases oil price rises or which tries to freeze consumer prices would certainly discourage investment in the UK’s oil and gas industry.

The existing fiscal regime is complex and burdensome and whilst some steps have been taken to reduce this, more can be done. The Queen’s Speech included plans to encourage the production of shale gas and geothermal energy but we await more detailed proposals. Whilst we should be aware of legitimate concerns over property rights, it is important for the government to allow a real market in fracking for shale gas to develop both for environmental reasons and for our long term energy security.

This article is an excerpt from our Growth Bulletin, authored by Adam Memon, Angeliki Terpou and Tim Knox. To read the full bulletin, click here. To sign up for our mailings, use the form on the left of our newsletter page.

Angeliki Terpou is an energy economist and the author of ‘Britain’s deteriorating energy security and why we must frack’.