Britain must act on water security

This article is an excerpt from the CPS Growth Bulletin, written by Adam Memon, Angeliki Terpou and Tim Knox. To read the full article, click here. To sign up for our mailings, use the form on the left of our newsletter page.

Water security is defined as having sustained, reliable and safe access to water. Britain’s water resources are facing increasing pressures from rising demand including stronger population growth and supply-side constraints such as more frequent periods of drought. As a result of falling water levels and reduced quality, it is no longer possible to think of water as a permanently abundant and readily available resource. Increasing water security through radical reforms to the abstraction licencing system and by embracing water trading is crucial for households and businesses.

Water abstraction is the process of removing water from rivers, lakes, canals, reservoirs or from underground strata. Data from the ONS indicates that in 2012 abstraction from non-tidal surface water and groundwater was 13,747 million cubic metres, a sharp rise on 2011. Total abstraction volumes fell consistently from 15,063 million cubic metres in 2000 to 11,399 million in 2011.

Whilst some organisations such as the World Nuclear Association argue a new generation of power plants have reduced water requirements, it is clear water remains a vital part of the electricity generation process. As the Environment Agency has argued, Carbon Capture and Storage technology used to reduce harmful emissions could lead to sharp rises in power station water; perhaps by anywhere between 44% and 140%. Evidently this could add significant additional pressure on water resources. 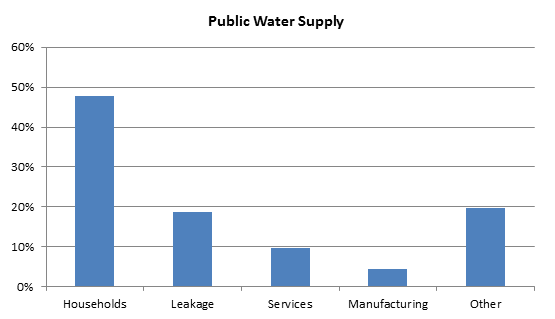 The Water Framework Directive (WFD) introduces a six yearly cycle of river basin management planning. A river basin management plan for each River Basin District was produced in 2009 and must be updated every six years thereafter. The WFD requires all waters to aim to achieve ‘Good Ecological Status’ by 2015. If that is not possible, interim targets for 2021 can be set with the aim of reaching full compliance by 2027. 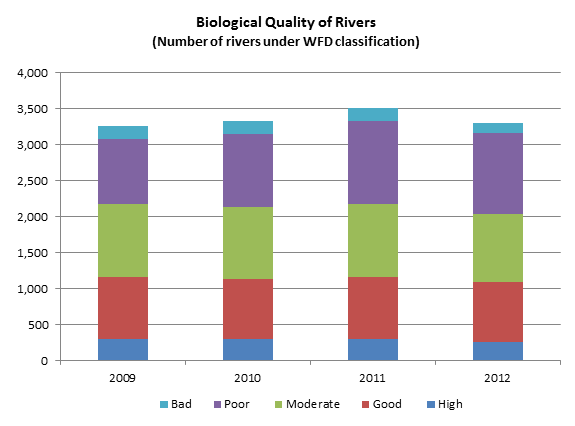 The Environment Agency argues that one of the most significant reasons why water bodies are failing to achieve Good Ecological Status is due to abstraction. Reform is therefore needed if British rivers are to reach the necessary level of quality.

SHALE GAS IS NOT A THREAT

Some are concerned the extraction of unconventional sources of energy (such as shale gas) might have an adverse impact on water security. The evidence base does not seem to support this perspective. The Environment Agency argues that whilst the extraction of shale gas does require water, the volumes under consideration are small compared with other uses of water. Furthermore, DECC argues that the risk of gas entering groundwater from the fractures in the rock is extremely low and an independent report by the Royal Society and Royal Academy of Engineering argued it is highly unlikely that fracking could result in gases escaping upwards into water sources.

Before any gas or oil operation starts in England, operators must submit details of their plans to the Environment Agency. These plans must contain a hydro-geological assessment, including details of the presence of groundwater or surface water and the management of abstracted water among many other issues. The flourishing of a genuine market in shale gas with the subsequent boost to accountability and openness would increase energy security without damaging water security.

There are a number of steps that must be taken. Some advocate for more robust demand management policies to cut waste and ease demand side pressures. In this respect the private sector is already delivering with an increasing take-up of meters which seem to cut waste by giving households and businesses much more information on their overall water consumption.

The Institution of Civil Engineers argues that since 1989 the water sector has attracted over £110 billion of investment to upgrade water and sewerage infrastructure. However, the rate of replacing and renovating the existing pipework infrastructure is too slow. Utility weekargues under the current rate of sewer replacement, sewer pipelines would need to last an average of over 800 years. Specification decisions are being made on the basis of a design life of just 50 to 125 years.

The Cambridge Institute for Sustainability Leadership estimates £96bn is required to fund investments in the water sector between now and 2030, which would require increasing the current levels of investments by at least £1.5bn per year.

Allowing water to be freely traded as a commodity would lead to a more efficient allocation from areas of higher abundance to areas of higher need. The greater efficiency of the market process alongside opening access to many new individuals and entities would help to drive this growth in investment. This could lead to a virtuous cycle of better storage and inter-connectedness, which in turn will further reduce barriers to trading water.

Water trading appears to carry the support of those most involved in water abstraction. In the summary of responses to DEFRA’s consultation on proposals to reform the abstraction licensing process which was published earlier this month, a clear majority believed quicker and easier water trading would be of benefit to abstracters. Trading water abstraction licences is already possible under the Water Resources Act 2003, but only a tiny number of licences have been traded.

The UK’s abstraction licensing system was designed more than 50 years ago for a completely different world. The Environment Agency has 224 schemes covering 417 licences. In 2013 it changed 66 licences to make them more sustainable and over the next two years, it plans to change or serve notice to change a further 100 licences. DEFRA has accepted that the UK’s water abstraction licencing regime is in desperate need of reform but only plans to legislate in the next Parliament with real change only coming in the 2020s.

DEFRA should now push on to implement the reforms to abstraction licences it proposed in its recent consultation paper so real change is achieved in the next Parliament.

The licensing system should be modified under the “Water Shares” proposal in the consultation. This would allow abstraction licences to be redefined in terms of percentage shares of available water. This system would enable prices to emerge from supply and demand, and the market to develop with observed transactions rather than being set by the government on the basis of limited information.

This system could help regional markets to develop as well as result in much greater interconnector investment. Licence reform could effectively separate the link between water ownership and water use. DEFRA’s other less ambitious proposal, aptly named “Current System Plus”, would still be an improvement on the current system. Whichever proposal DEFRA chooses, it should get on with implementing it as soon as possible.

The Environment Agency argues that abstraction is one of the most significant reasons why water bodies are failing to achieve Good Ecological Status. Reform is therefore needed if British rivers are to reach the necessary level of quality.

Angeliki Terpou is an energy economist and the author of ‘Britain’s deteriorating energy security and why we must frack’.