Welfare Dependency and the Size of the State

At the Autumn Statement in December last year, the Chancellor outlined his plans to reach an absolute budget surplus by 2018/19. In its latest Economic and Fiscal Outlook, the OBR forecasts that under that plan for deficit reduction, public spending will reach 35.2% of GDP. The Labour party has strongly condemned these plans to cut the deficit and has argued in favour of higher taxes and more public spending. The result would be that under the Labour party’s plans, the state would be a larger share of the economy by 2020 than envisaged by the Government.

Welfare dependency is an economically and socially destructive phenomenon. Not only does it lead to blunted work incentives but has the pernicious effect of engendering a culture of low aspirations in some communities. The welfare state should be about protecting the vulnerable in their times of need and where possible helping them to get back to a situation of self-reliance.

Unfortunately, rather than a transitory phase, welfare dependency has become a permanent trap for many households. As President Franklin Roosevelt declared, dependency “induces a spiritual and moral disintegration fundamentally destructive to the national fibre. To dole out relief in this way is to administer a narcotic, a subtle destroyer of the human spirit.”

All the political parties are, at least rhetorically, in favour of reducing welfare dependency. Upon becoming Prime Minister in 1997, Tony Blair proclaimed that “the new welfare state must encourage work, not dependency” and Gordon Brown promised to “slash welfare dependency.” Unfortunately these efforts failed. Dependency, which can be defined as the percentage of households receiving more in benefits than they paid in taxes, rose from 45.9% in 1997 to 53.5% in 2010 when the Labour party left office.

This proportion fell to 52% in 2012/13, the latest year for which data is available. Of particular note is that the net dependency of the middle 20% of households fell by 17% compared to two years before. However, with more than half of households receiving more in benefits than they pay in taxes, it is still too high.

Using data from the ONS and from the OBR, it is clear that there has been a strong, positive correlation between the size of the state and welfare dependency over the last quarter of a century. To measure the size of the state, we use the OBR’s figures for Total Managed Expenditure as a percentage of GDP. To measure welfare dependency, as discussed, we use the ONS data on the percentage of households receiving more in benefits than paid in taxes. The definition of benefits includes both cash benefits and benefits-in kind. 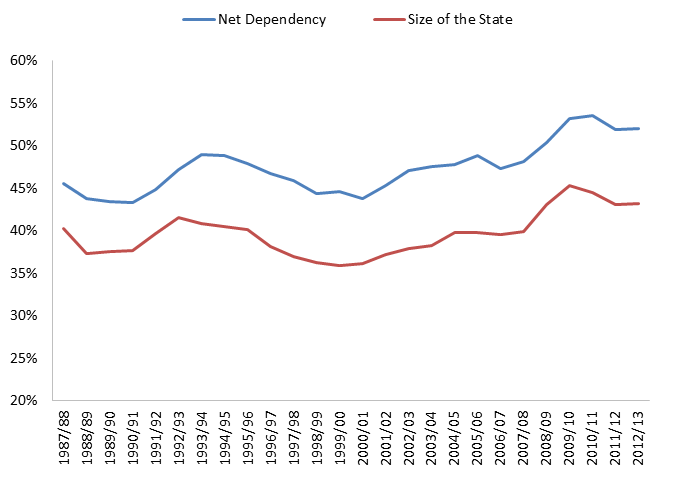 If the correlation between the size of the state and welfare dependency holds, then as public spending falls as a share of GDP, welfare dependency should also fall; as happened between 2010/11 and 2012/13. This obviously depends on the type of taxes and welfare reforms implemented. Although generally, reduced benefit payments and public sector expenditure relative to tax revenue should lead to a smaller state which in turn should lead to a reduction in the proportion of households receiving more in benefits than they pay in taxes.

Net dependency in 2012/13 was 52% and the state was 43.2% of GDP. Assuming that the relation holds, then regression analysis suggests that for every 1 percentage point change in state spending as a percentage of GDP, dependency should change by 1.034 percentage points. Given our forecasts for the number of households and public spending, the number of households receiving more in benefits than they will pay in taxes under the Conservatives by 2020 is estimated at 11.89 million compared to 12.63 million under Labour’s plans.

This means that 750,000 more households could be in welfare dependency by 2020 under Labour’s spending plans compared to under the Conservative spending plans. 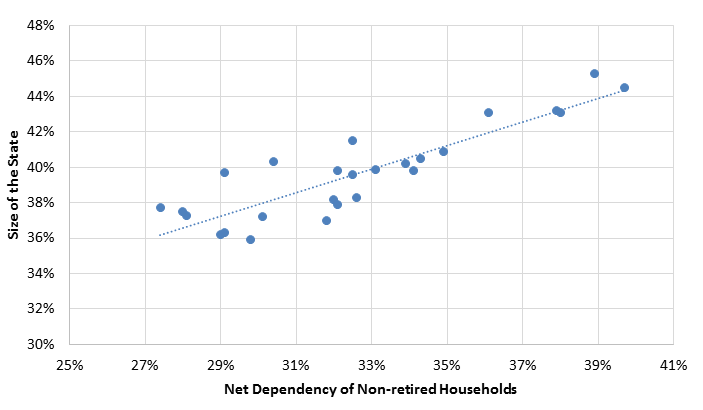 Net dependency should really look at both cash benefits and benefits in-kind to give a true reflection of dependency on the state. However, some might argue that dependency should look purely at direct transfers rather than benefits-in kind which include health and education spending. In 2012/13, 37.5% of households received more in cash benefits alone than they paid in taxes. The correlation between net dependency on that measure and the size of the state is slightly weaker with a correlation coefficient of 0.73. However, as the graph below shows, the relationship over the last quarter of a century is clear. 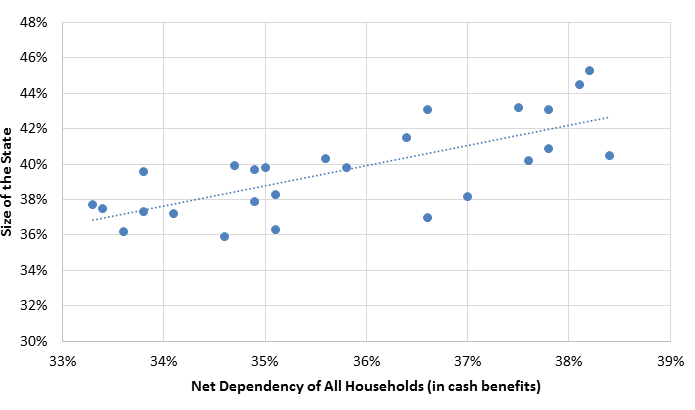 Non-retired households with children seem to be particularly dependent on the state. In 2012/13, 56% of such households received more in benefits than they paid in taxes compared to 25.6% of non-retired households without children. This must in large part be explained by heavier reliance on education spending and other child related cash benefits. Nevertheless, this does highlight the need for continued pro-growth reforms to boost employment and real wages.

There are 1.5 million children who are currently living in workless households and there are still 241,000 children living in households in which nobody has ever worked. This is an improvement on previous years but still too high. A larger state will mean more children growing up in households dependent on welfare.

Elevated and persistent welfare dependency leads to reduced work incentives, distorts behaviour and tears at the social fabric of a nation. The size of the state is strongly related to welfare dependency in the UK. It is clear that Labour’s plans for a larger state will inevitably lead to hundreds of thousands more households in welfare dependency.