This article is taken from the fortnightly CPS Economic Bulletin. To receive emails from the CPS, subscribe using this form.

When the OBR published its Economic and Fiscal Outlook in December last year, it forecast that public spending would reach 35% of GDP by 2020 under the Coalition’s plans. Many condemned this as a return to the 1930s. They were of course wrong. However, in recent weeks a combination of those demanding a bigger state, pessimism over deficit reduction and recent scandals involving the use of aggressive tax avoidance measures by big banks has led to renewed calls for higher taxes. These arguments should be rejected. A heavier tax burden would undermine productivity growth, damage work incentives and make Britain less competitive internationally.

Historical data of net tax revenue and national insurance contributions as a percentage of GDP shows that tax revenue over the last half a century has been remarkably stable. Even with big spending social democratic governments, it has been virtually impossible to raise much more than 37% of GDP. In fact, the average tax to GDP ratio between 1964/65 and 2014/15 was 35% - the same ratio incidentally that OBR forecasts for public spending in 2020 under the Coalition’s plans. Currently at 36% of GDP, it is clear that there is very little capacity for substantial increases in the tax burden. This is especially the case given the UK’s increasing reliance on a very small but highly mobile proportion of the population to generate revenue (remember that the top 10% of earners pay 55% of all income tax). 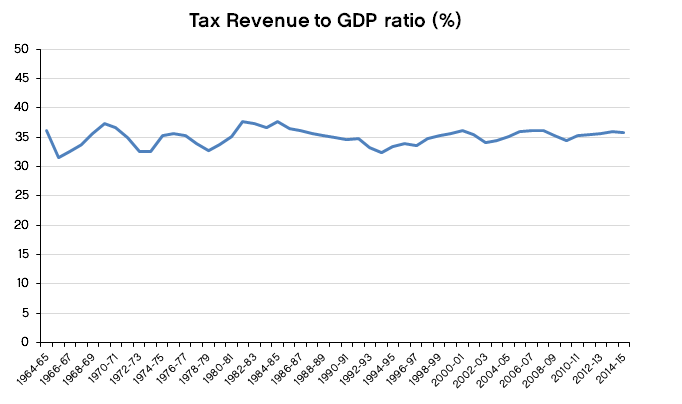 In its Economic and Fiscal Outlook, the OBR measure of “Current Receipts” shows a similar picture. The average of Current Receipts as a percentage of GDP over the last half a century is 38% of GDP and it has not even been that high since 1988/89. If the UK is to balance its budget, public spending as a proportion of GDP must therefore fall to reach what seems to be a ceiling on the country’s tax raising capacity.

In its latest summary of the UK economy, the OECD argued at length about the need to restore productivity growth. This is a theme that we have been discussing for a while. Sustained productivity growth is essential to boost real wages and living standards which will in turn help reduce pressures on the welfare budget. Finding ways to restore meaningful productivity growth must now be the single most important goal for policymakers.

There is both a cyclical and structural element to the productivity weakness that the UK faces and continued growth in aggregate demand should lead to some improvements over time. However on the supply-side, Research and Development spending as a percentage of GDP has fallen over the last 15 years in the UK relative to other EU countries. Furthermore, as the OECD shows in its graph below, since 1990 investment as a share of GDP in the UK has fallen and has underperformed compared to the average across the G7 and OECD countries. 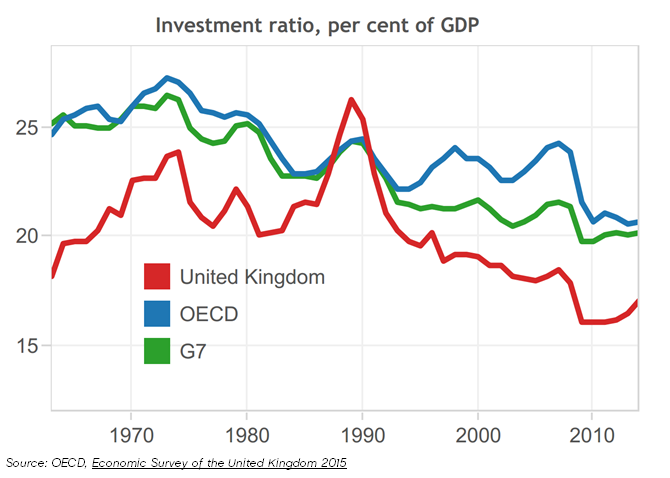 A higher tax burden, particularly on investment, would damage the ability of productivity growth to return to its pre-crisis rate. Higher taxes on profits reduce the funds available for investment which means less capital accumulation, less innovation, less training and ultimately slower productivity growth. The consequences for skills development must also be of concern given that there was a 17% per-capita fall in investment on training between 2011 and 2013. Gross Fixed Capital Formation has been recovering in recent years, although at £72.6 billion in Q4 2014, it fell by 0.5% over the quarter and has still not yet reached its pre-crisis real terms level. There are also less tangible, but no less malign, effects of higher taxes on entrepreneurship and the UK’s attractiveness as a place to do business. By punishing success and aspiration, a higher tax burden would create a more hostile business environment which would in turn damage investment, productivity and growth.

If the Labour Party wins the General Election, it has pledged to increase the main rate of corporation tax from 20% to 21%. The party has also pledged to keep the corporation tax rate at the lowest rate in the G7 which gives it the leeway to raise it to 26.5%. The Coalition Government has cut the main corporation tax rate from 28% to 21% and it will be cut to 20% in April. This means that the small profits rate which is currently set at 20% will be merged to create a single corporation tax rate and that marginal relief for companies earning profits between £300,000 and £1.5 million can be eliminated.

Such a tax rise would effectively be a tax on jobs, wages, and investment and it would go against the trend amongst developed economies to cut corporation taxes. The rising global mobility of businesses and the profits they earn means that higher corporation taxes would drive more corporate activity abroad.

In addition, Labour has ignored the benefits of tax simplification which would come from a unified 20% corporation tax rate. Simplification of the corporation tax rates would deliver administrative savings to the Treasury and cut unnecessary compliance costs for businesses which would no longer have to spend as much time working out their precise tax liability. This is especially beneficial for fast-growing businesses without big compliance departments. As the IFS argues, the extra complexity which the party therefore wants to maintain seems “farcical”.

It is inevitable, that fewer jobs would be created under the Labour proposals. Retained profits are one of the key ways that businesses fund their expansion. Labour’s policy means that businesses would have less money available to pay wages to existing and new employees. The result would be that firms would find it more difficult to hire new workers. In our recent briefing note, our model estimates that, other things being equal, a rising corporation tax rate of one percentage point per year would lead to a reduction in total employment of more than 96,000 by 2018/19 compared to the OBR’s estimates of employment under the Government’s plans.

Another proposal has been made to implement a “mansion tax” which would levy an annual charge on high value houses. However as we argue in our recent paper, this policy is both outdated and unnecessary. The top 1.6% of households already contributes 45% of stamp duty and recent reforms have significantly increased the tax burden on higher value properties. Changes to Stamp Duty Land Tax have increased the burden on “Mansions” by £1.1 billion and the Annual Tax on Enveloped Dwellings has increased it by another £100 million. The tax paid on a house now being sold in South West London for £2.5 million has increased by 405% since 2009.

The reforms to property taxation are already raising as much revenue as a Mansion Tax would. The introduction of such a new tax after the next election would be costly to implement and would add a layer of complexity and unfairness into the tax system for residential property. It would also undermine the attractiveness of the UK to overseas investors with predictable consequences for investment. There are of course many other concerns such as what might happen to cash-poor, asset-rich households who could be forced to sell their homes.

A point which must constantly be made is that higher tax rates do not always lead to an equivalent increase in tax revenue. Indeed, the basic Laffer curve analysis that there exist revenue-maximising tax rates above which revenue begins to fall is still relevant today. Populist measures to tax the rich through punitively high tax rates rarely yield much revenue. The 50% rate of income tax for example raised only a negligible amount which was far outweighed by the economic damage.

Whilst it depends on the starting point, it is obvious that cuts in tax rates are rarely entirely self-financing and increases in tax rates will usually raise some revenue. However, dynamic analysis of the fuel duty cuts carried out during this Parliament suggests that between 37% and 56% of the static fall in revenue would be recovered in the long term through higher profits, wages and consumption. Dynamic analysis of the corporation tax cuts suggest that between 45% and 60% of the static revenue loss would be recovered.

Political parties calling for higher tax rates should realise that their proposals would not only damage work incentives, growth and productivity but may not even raise much revenue.

Recent tax avoidance and evasion scandals highlight the need for much greater simplification of the tax system. The complexity of the tax system with myriad loopholes, arbitrary discounts and reliefs distorts incentives and increases compliance costs. It is also generates a belief that it is rigged in favour of the already rich who have the resources to game the system. Why, many would ask, is caviar exempt from VAT but people working full time on the minimum wage still have to pay income tax and national insurance?

The solution, however, is not to make everyone poorer by raising taxes but to let those on low incomes keep more of what they earn. It is both inefficient and immoral that low paid and minimum wage workers still lose substantial proportions of their income through direct income taxes. Lower taxes on the low paid should come alongside revenue-generating tax simplification and perhaps also basic tax switches aimed at boosting efficiency and productivity.

Moreover, a higher tax burden to fund greater public spending and a larger state will inevitably lead to more people being dependent on that larger state. Personal responsibility, individual choice and economic freedom are all eroded with greater dependency on the state.

Higher taxes are not the solution to the challenges facing the UK economy. Higher tax rates would further weaken productivity growth and deteriorate Britain’s international competitiveness. Instead, supply-side reforms are needed to encourage innovation, training and wealth creation. The different political parties should abandon plans for damaging tax rises.

This article is taken from the fortnightly CPS Economic Bulletin. To receive emails from the CPS, subscribe using this form.