No time for complacency on UK economy

Since 2010, the UK economy is slowly becoming more resilient. GDP growth has remained strong, with the UK achieving the highest level in the G7 at 2.8% in 2014. Unemployment has continued on its downward trajectory, with the number of unemployment claimants falling by just over 17% in the last year. The claimant rate fell faster in the North East, Yorkshire and the Humber, the East Midlands and the West Midlands than in London, according to figures published by the House of Commons Library. There is also strong evidence of some regions outperforming London in economic growth. For example, theOffice for National Statistics (ONS) suggests that gross value added in the West Midlands for 2012-13 outpaced London, increasing by 2.8% compared to London’s 2.6%.

The Government has also achieved success in rebalancing the economy away from public sector spending. UK public spending as a proportion of GDP is estimated to have fallenaround four percentage points since its peak in 2011, dropping from 45.3% to 41.4% in 2015. As a consequence, significant progress has been made in reducing the UK’s budget deficit – which stood at a peacetime record of 10.2% of GDP in 2010/11. The budget deficit stands at 3.7% for the year 2014/15 and is anticipated to move into surplus by 2019/20.

The UK’s performance on increasing business investment in the economy has also been positive, growing at an average rate of 5.2% a year for the last five years. More recently, business investment has continued to show strong growth, increasing by 5% when comparing Q2 2015 to Q2 2014. This compares favourably to the growth of 3.7% in retail sales – a good indicator of consumer spending – suggesting a move away from consumer spending-led growth towards more sustainable investment growth.

However, there is no room for complacency. The UK faces a series of global external risks, including from the Eurozone and the slowdown in China. There are also a number of concerns relating to the UK’s domestic economy.

The lack of progress in boosting exports over the past year is accounted for by the muted performance of industries producing visible goods. Net trade in services increased by £8.1 billion in 2014, but this was more than offset by a widening deficit in the balance of trade in goods. The ONS reported a £10.8 billion fall in the export of goods over the same period, leading to the UK’s goods deficit increasing by £8.4 billion. More recent data highlights concerns for both the exports of goods and services. A British Chambers of Commerce survey suggests the balance of exports in both services and goods has slumped between Q2 2015 and Q3 2015, highlighting major concerns for the Government’s export ambition target of £1 trillion by 2020.

In 2012, the Government stated an ambition of achieving £1 trillion of exports in goods and services by 2020, requiring an 8% growth in exports year-on-year. However, exports have stagnated since then, increasing by a mere 2.7% over two years. This means that exports now need to grow by 11.7% annually to hit the 2020 target. As a result, the Office for Budget Responsibility (OBR) now forecasts that the cash value of total exports will be £630 billion by 2020, around a third lower than the Government’s £1 trillion export aspiration.

Although UK factory growth has been strong this month, recent data from the ONS’ economic review confirms that output of the UK’s manufacturing and construction industry has fallen over the past three months. Over the longer term, the output of the manufacturing sector remains 6.3% below its pre-crisis peak. On the other hand, output in services is estimated to be 11.1% above its pre-downturn peak. 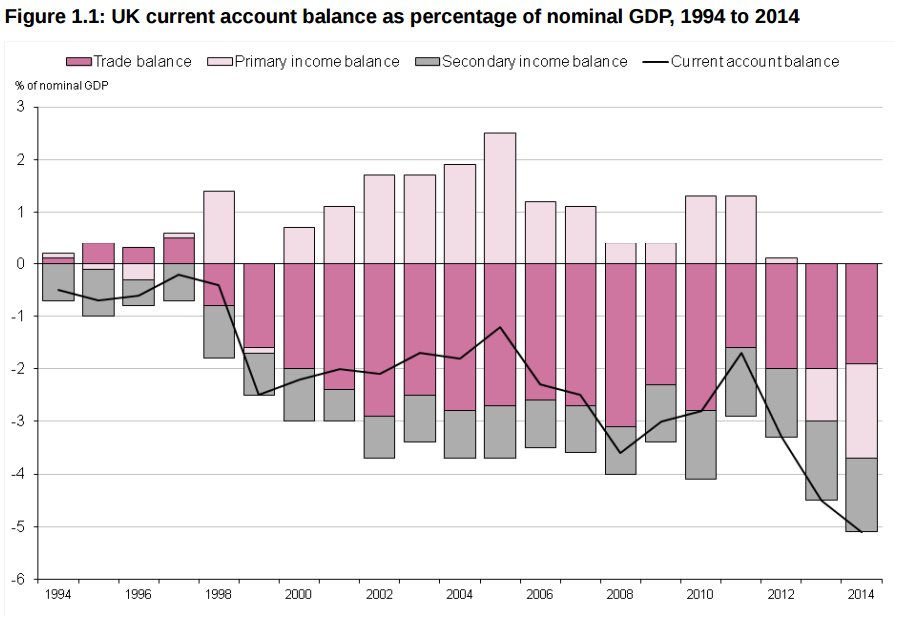 The deficit on the UK’s current account balance widened in 2014 to £92.9 billion, equating to 5.1% of GDP. The current account deficit is the difference between exports and imports as well as the balance of overseas income and income received by non-UK citizens on UK investments.

In both measures, this was the largest annual deficit since records began in 1948. However, the rapid hike in the UK’s current account deficit should be treated with caution. For example, the incoming governor of Ireland’s central bank has suggested that corporate financial engineering may be behind a fall in the return on Britain’s Foreign Direct Investment Assets. 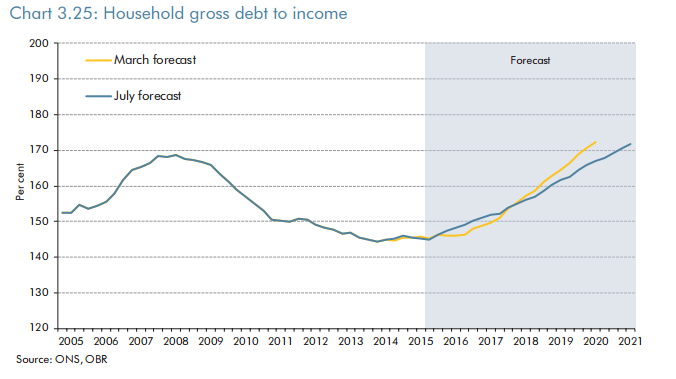 Households have undergone significant deleveraging since the onset of the financial crisis. However, the OBR projects that this trend will be reversed over the next six years.

The OBR expects the ratio of total debt to income to rise by 26 percentage points from the start of 2015 to the start of 2021. This will mean the household debt to income ratio will surpass the level observed during the 2008/09 financial crisis by 2021, raising fears about the impact of prospective interest rate rises over the coming years.

Nearly 12 percentage points – equal to around half of the increase – will be accounted for by the projected strong growth in house prices and transactions. Savills forecast that house prices will rise by 20% over the next five years. This highlights the consequences for households that are arising from the UK’s sluggish construction activity.

Annual house building starts in England reached 140,500 over the last year, lagging behind the 250,000 required to keep up with rising demand. The Government needs to promote a planning system that is lighter and more streamlined to keep up with these pressures. Ministers should also review whether it can increase its current target of releasing public land for up to 150,000 homes during this parliament.
(See CPS Pointmaker “Pink Planning”)

The Government is set to commit to £100bn of spending on infrastructure in the Autumn Statement. The Chancellor should examine the creation of infrastructure bonds to finance investment, rather than relying on the public sector or other vehicles such as the Private Finance Initiative. Infrastructure bonds could build on London’s expertise in financial innovation, provide attractive yields for prospective investors and unlock new streams of cheap infrastructure finance.
(See CapX article “An idea whose time has come: project bonds”)

A Final Decision on Airport Expansion

Britain’s airport capacity is at stretching point, with Heathrow operating at capacity and Gatwick quickly approaching the same point. A new runway is desperately needed in the South East to continue promoting trade and investment into the UK. The Davies’ Commission has expressed a clear recommendation that a third runway at Heathrow represents the best economic opportunity for the UK. The Government must now make a rapid and decisive decision on where airport capacity should expand.
(See CPS Pointmaker “Double Up On Heathrow”)

The Government needs to review the impact that unilateral green measures are having on UK industry. For example, UK energy-intensive firms face some of the highest electricity prices in the EU. Ministers should consider scrapping the Carbon Price Floor – which is solely faced by UK manufacturers – and pursue a continued push to bear down on the costs of renewable energy subsidies.

Shale gas exploration could be a major boon to the UK economy. Furthermore, as the majority of the resource is in the North of England, it could help continue to rebalance the UK economy geographically. However, the planning process for many shale exploration applications has been sluggish – the most recent example being Lancashire County Council, who took over a year to deliberate on a fracking application. The Government must show renewed initiative to ensure that the planning process for shale exploration applications is fast-tracked.
(See CPS Pointmaker “Why Every Serious Environmentalist Should Favour Fracking”)

The Government must promote trade opportunities to help UK firms increase exports. The proposed Transatlantic Trade and Investment Partnership could offer a boost to many of the UK’s export industries, particularly the motor manufacturing industry. Ministers must lobby for the reduction in non-tariff barriers between the UK and the US – whether the UK remains in the European Union or not. Furthermore, the Government should examine ways of reducing the barriers that British businesses are facing when exporting to the emerging economies.

The sharing economy is one of the UK’s fastest growing sectors, hosting a number of new companies using information technology to allow consumers, businesses and the public sector to make better use of existing resources and assets. The UK must resist measures that will frustrate innovation and progress in these sectors, particularly proposals such as those from TfL that would impose a mass of regulation on Uber taxis.
(See CPS Economic Bulletin “Unleashing the Sharing Economy”)

The Government must examine ways of introducing more competition into various sectors. For example, the water market has been operating as a series of regional monopolies. While it is welcome that retail sector competition is due to begin in April 2017 for non-households, the Government should also seek rapidly to expand this consumer choice and competition to households in the water market.
(See CPS blog “Britain’s creaking water industry need real competition”)