What's behind the housing crisis?

This article is taken from the CPS Economic Bulletin written by Daniel Mahoney and Tim Knox. To receive it by email before it is available online, sign up here.

Successive Governments have presided over a fall in England’s housebuilding programme, which has resulted in a chronic shortage of housing. Housing completions over the past few decades have declined dramatically, falling from a peak of around 350,000 per annum in 1968 to just under 125,000 for the year 2014-15, according to the latest Department for Communities and Local Government (DCLG) figures. 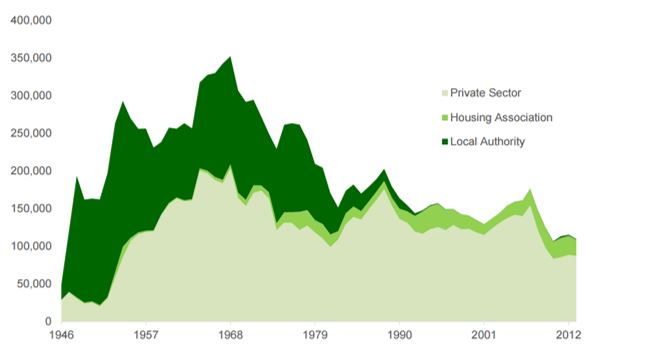 Increased demand for housing in England will require 245,000 to 250,000 completions a year from 2011 to 2031, according to the Town and Country Planning Association. This rate of building would merely satisfy future demands for housing. However, housebuilding since 2011 has not kept pace with this minimum requirement, with an estimated under-delivery of 400,000 homes from 2010/11 to 2013/14 – meaning that the building rate is less than half what is required.

If the Government sought to alleviate strains in the housing system, the number of annual completions would need to reach 320,000 homes a year, according to the Home Builders Federation. This level of building has only been achieved in four years since World War Two.

The stock of Local Authority property has fallen from around 3 million to just under 1.7 million over the past 15 years. There has been a corresponding increase of nearly 1.1 million in housing from private registered providers (housing associations). This, however, fails to offset the loss of Local Authority properties, leading to the UK’s social housing stock falling by around 300,000 over 15 years.

Owner occupation has flat-lined in absolute terms, remaining at around 14.7m dwellings over the period. However, relative ownership levels have plunged, with a particular fall in ownership observed for the younger demographic. Office for National Statistics figures suggest 60% of 25-34 year olds owned their own home in 2001/02, compared to just over 40% currently. Over this period, average house prices increased from around £80,000 to nearly £200,000. 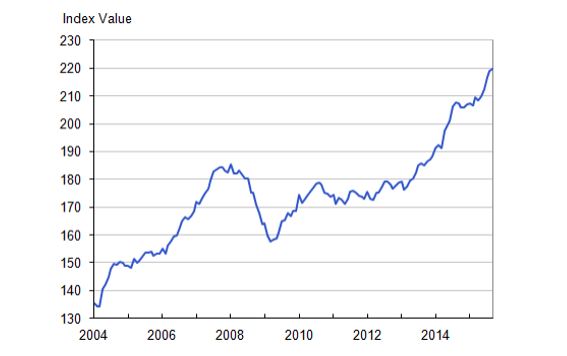 The private rented sector has observed strong growth, increasing by 84% from 2000 to 2014. This trend has been accompanied by a dramatic increase in housing benefit claims. For the UK as a whole, the Department for Work and Pensions estimate that the number of private sector tenants claiming housing benefit has risen 120% from 771,000 to 1.7m from 2000 to 2014, suggesting the lack of social housing is leading to a marked increase in welfare payments. Over the same period, spending on housing benefit to private tenants has increased from £2.85bn to £9.32bn.

Population growth and the continuing fall in the average household size are set to be the key drivers of additional housing demand in the UK.

DCLG also estimates that the average household size will fall from 2.36 in 2012 to 2.21 in 2037, adding further demand pressure on the UK’s housing stock. The fall in household size is being driven by increases in lone households, which are set to rise from 34% in 2008 to 41% in 2033. Part of this is accounted for by family breakdown, which is estimated to add 52,000 a year to UK housing demand.

There are additional localised demand factors on UK housing. For example, foreign investment is having a notable impact on London’s prime housing market. Analysis set out by the Institute for Fiscal Studies highlights that 69% of new builds in prime London in the two years to June 2013 were bought by non-UK nationals. The effect of this is strongest on prices in prime London locations, but there are likely to be wider knock-on effects that put upward pressure on prices further down the housing market.

Nearly 1.6 million residents in the UK have second addresses located in the UK, with around 11% of these being categorised as holiday homes, according to the Census 2011. This compares to 28 million dwellings in the UK as a whole, suggesting that second home ownership is not a major component of housing demand in the country. However, in certain localities such as Cornwall – where it is estimated that 5% of properties are second homes – pressures will be observed on housing stock.

The Government has made progress on boosting housebuilding in England, increasing net annual additional dwellings by 25 per cent in the year 2014-15 for England. This provides evidence that the Government’s simplification of the planning system in the National Policy Framework of 2012 is having some positive impact. However, the number of completions is still well below what is required to meet future annual demand.

There appear to remain issues with the UK’s planning system. The Home Builders Federation has recently said that the planning system remains “far too slow, bureaucratic and expensive.” There are also significant geographical disparities in housebuilding. In London, for example, 13 inner London boroughs gave planning permission for 11,970 new homes compared to just 8,000 of the 20 Outer London boroughs. The difference between certain London boroughs is particularly striking. For example, the London Borough of Tower Hamlets gave permission for 3,000 starts whereas Kingston only granted 75 last year.

Construction of housing association properties remain modest, with completions only reaching 22,030 in 2013 compared to a housing waiting list of nearly 1.7m in that year. This highlights the need for additional incentives to promote more investment from housing associations.

Reports of so-called ‘land banking’, whereby developers hold onto land after being granted planning permission, appear to have only a moderate impact on UK housing supply. The Office of Fair Trading in 2008 concluded that “the evidence presented to the OFT suggests that homebuilders are not delaying building on permissioned land to an extent that would appreciably affect the rate of delivery of new homes.” After five years, the Local Government Association said that the number of homes that had been “land-banked” actually fell by 23%.

Annual house building completions in England reached 125,000 over the last year, lagging behind the 250,000 required to keep up with rising demand. The Government needs to promote a planning system that is lighter and more streamlined to keep up with these pressures. The Government should identify “Pink Zones” where a simplified planning regime could be implemented, allowing developers to bypass many regulations and boost building in these zones. Support for these zones needs to be mobilised from landowners, local authorities, residents, employers and builders.
(See CPS Pointmaker “Pink Planning”).

The level of building by Housing Associations is currently very modest, reaching around 24,000 for the year 2014. The Government needs to promote a system that incentivises housing associations to invest in greater levels of housing stock. The Centre for Policy Studies will be examining ways of achieving this over the coming months.

There are huge disparities in the level of housebuilding. For example, the London Borough of Tower Hamlets gave permissions for 3,000 starts whereas the London borough of Kingston only granted 75 last year. The Government should examine why these disparities exist, and produce a strategy to redress these imbalances.

Free up Public Assets for Building

Ministers should review whether it can increase its current target of releasing public land for up to 150,000 homes during this parliament. Public bodies such as the Ministry of Defence are large landowners and some of its assets could be utilised for greater house building across the country. In London, Transport for London owns 5,700 acres across more than 3,000 sites, of which over two thirds are in Zones 1 or 2 where there is huge demand for housing and commercial development.

Promote Business Use to Residential Use

The Government previously introduced temporary development rights, allowing offices to be converted into to new homes without the need for planning permission. These rights were set to expire in May 2016, and the Government must ensure that these development rights are made permanent.  Ministers should also examine ways of ensuring that eased regulations to convert retail into residential are working effectively.

The Government is unable to control many factors affecting the level of population in the UK, including the rate of births, life expectancy and levels of emigration. However, Ministers do have some control over the levels of immigration, which will be a key variant in future demands for housing. The Government could dampen future demand for housing by moving towards its target of reducing net migration to the tens of thousands.

Julian Hawksworth - About 1210 days ago

Although, not amongst the most recent articles, I felt inclined to read this; having considered some more recent CPS articles (on the same or related topics). What I liked most, about this one; is the sheer variety of factors which it covers (in terms of those contributing to our housing crisis). Nor, is there any attempt; to attribute the entire blame to any one government. The writer's recommendations, are also wide-ranging. As is his acknowledgment, of the factors; which government couldn't be expected to control?