Are the doommongers right about the UK economy?

The technical definition of a recession is two consecutive quarters of negative economic growth as measured by Gross Domestic Product (GDP). Since 1990, the UK has experienced two technical recessions. Consecutive negative growth was observed from 1990 Q3 to 1991 Q3 and more recently during the global financial crisis from 2008 Q2 to 2009 Q2.

HAS A RECESSION BECOME MORE LIKELY SINCE THE AUTUMN STATEMENT?

Although figures can vary, it is often assumed that a downturn of 20% or more in the stock market is considered a bear market, which is colloquially referred to as a stock market crash. In late January of this year, the UK’s FTSE 100 closed 20% below the record it reached in April 2015, leading some commentators to speculate that a recession may hit the UK in the near future. For example, The Independent ran with the headline “FTSE 100 hits 3-year low amid highlighted fears of a new global recession”, while The Guardian claimed “fears grow of repeat of 2008 financial crash as investors run for cover.” 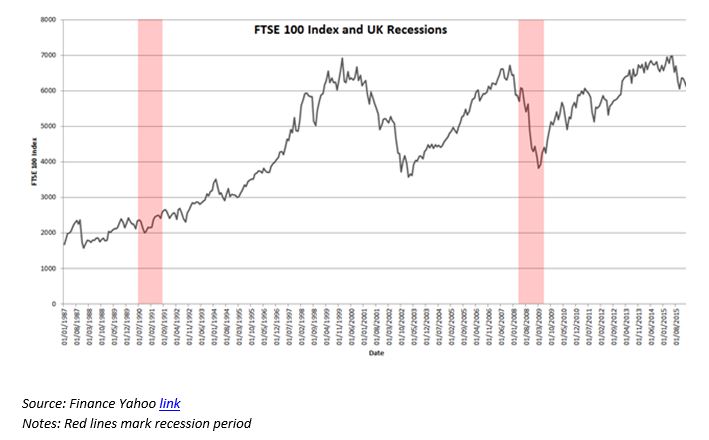 A number of UK analysts suspect that this year’s bear market is ‘noise’ and is not the pre-cursor to a recession. Ambrose Evans-Pritchard notes that global economic growth has been stable for years, growing by 3.3% in 2013, 3.4% in 2014 and 3.1% in 2015. Moreover, Alex Dryden – a market analyst from JP Morgan – has said: “a recession looks unlikely as America’s economy is ticking along nicely. Similarly, an oil price spike does not look on the cards.”

Which Indicators are Effective at pre-empting a Recession?

Given the unreliability of the stock market in predicting recessions, some economists prefer to examine other indicators as a way of foreseeing an economic downturn. For example, Joseph Carson – a US economist for the research firm Alliance Bernstein – relies heavily on three economic factors: new manufacturing orders, new building permits and job creation numbers. In the UK, the three metrics that align with these measures are the manufacturing PMI, house building starts and the unemployment rate.

Figures 2, 3 and 4 suggest that these indicators – in conjunction with one another – are relatively effective at predicting recessions. Housing starts – which is considered a leading economic indicator – fell by 35% in the two years leading up to the recession in the early 1990s and there was also a dramatic fall in housing starts prior to the financial crisis, declining by nearly 60% from 2007 Q1 to 2008 Q3 (see Figure 2). There was also a modest fall in manufacturing PMI before the financial crisis, where PMI fell below 50 in May 2008 – indicating a contraction in activity of the sector. Figure 4 suggests that unemployment trends appear to be a lag factor – only increasing significantly after the onset of a recession in the UK. 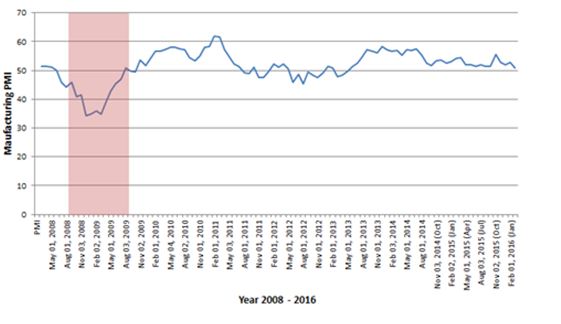 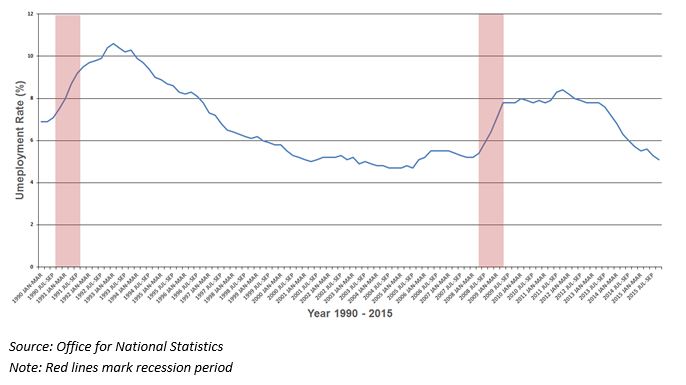 How are these indicators performing currently?

Current data would suggest that these indicators are all performing well in the UK economy, suggesting that a recession is unlikely in the foreseeable future. The latest data includes:

HOW HAS THE CHANCELLOR’S BORROWING OUTLOOK CHANGED?

At last November’s Autumn Statement, the Office for Budget Responsibility (OBR) projected that, over the five year period from 2016-17 to 2020-21, there has been an improvement of £27 billion in the underlying forecast compared to the July Summer Budget. This was largely accounted for by higher than expected receipts from income taxes, corporation tax and VAT, along with a slight upward revision to future UK GDP growth.

Despite the Government’s overall decisions at the Autumn Statement adding £18.7 billion to public sector borrowing, these forecasts meant the Chancellor was still expecting to achieve a £10.1 billion budget surplus by 2019/20. This would allow the Chancellor to satisfy the Government’s legally binding Charter for Budget Responsibility, which demands an absolute surplus on public sector borrowing by the end of 2019-20.

Changes in Global Outlook since the Autumn Statement

The global growth outlook has declined since the Autumn Statement in November. TheInternational Monetary Fund in January claimed that “risks to the global outlook remain tilted to the downside and relate to ongoing adjustments in the global economy.” There are particular concerns about the impacts of a slowdown in emerging market economies, China’s rebalancing and lower commodity prices.

Nearly 30% of the UK’s economy is accounted for by exports of goods and services, according to the World Bank. This is compared to the level of 13.5% in the US, highlighting that the UK economy is more vulnerable to global economic shocks.

The UK’s record on improving export growth remains muted. The deficit in goods and services was nearly £12 billion in Q4 2015, which is up from just £4.6bn in Q2 2015, according to theOffice for National Statistics. The UK’s disappointing record on exports means that the Government’s target of achieving £1 trillion of exports by 2020 appears unachievable. At the current rate, the British Chambers of Commerce 2015 International Trade Survey projects that the Government will miss this target by 14 years.

A Change of Course from the Office for Budget Responsibility?

The OBR reported that the most recent borrowing figure for January 2016 – which is usually a good month for the exchequer – underachieved market expectations. Borrowing in the next two months would now need to halve relative to last year for the OBR’s November forecast to be met. The OBR has admitted that “considerable uncertainty remains over the prospects for the remaining two months of the financial year,” which could indicate that borrowing projections at the Budget 2016 are set to be weaker than forecasts set out at the Autumn Statement. This will have implications for Osborne’s spending plans, given that the easing of spending cuts at his Autumn Statement were predicated on the OBR’s improved forecasts.

The Chancellor is on record as saying that global economic turmoil and slower growth means“we may need to undertake further [public spending] reductions.” This adds further evidence that borrowing projections are set to decline at the Budget 2016.

The likelihood of a recession this year is small – unless, of course, there are severe global shocks. Despite the falls in the stock market, the value of the FTSE 100 is notoriously inaccurate in predicting an economic downturn. Other economic indicators – including manufacturing, construction and unemployment – remain very robust, meaning the chances of a recession in 2016 are perhaps lower than many expect.

However, the Chancellor is now in danger of missing his borrowing targets – much of which can be accounted for by continuing global economic uncertainty. The Chancellor used improved OBR forecasts to soften spending cuts in his Autumn Statement. Disappointing borrowing figures for October, November and January mean that the OBR is likely to revise its forecasts downwards going forward. The implication of this is the Chancellor will have to implement additional spending cuts to meet commitments under the Government’s Charter for Budget Responsibility, which demands a budget surplus by the end of 2019-20.