Compared to the March forecast, the Office for Budget Responsibility (OBR) is projecting an additional £122.1 billion of borrowing over the five year forecast period. Nearly half of the decline in fiscal outlook is accounted for by factors relating to Britain’s exit from the European Union. The other half is a combination of classification changes, non-EU related circumstances and the Government’s additional borrowing from decisions made at the Autumn Statement.

The Government is no longer expecting to hit a budget surplus by 2019-20. Instead, Philip Hammond has introduced a new fiscal rule that requires the UK to run a structural deficit below 2% of GDP by the end of this parliament.

Debt to GDP ratios are now expected to peak at 90%, according to the OBR forecast. This could be cause for concern. A study conducted by Reinhart and Rogoff suggests that median economic growth rates fall by 1% above the threshold of a 90% debt to GDP ratio. Although the findings of this study have been disputed, there is broader evidence of a negative association between debt and economic growth 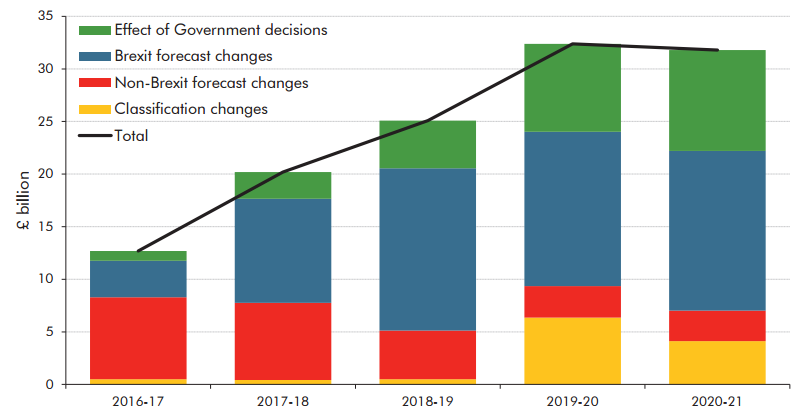 Although the OBR’s growth forecasts have declined since March 2016, the forecasts are far more optimistic than those presented in the Treasury’s pre-Brexit report “The immediate economic impact of leaving the EU”. The OBR is now projecting growth of 1.4% in 2017, which compares to the Treasury projection of between -0.8% and 0.2% in the event of a Leave vote (see Table 2). Furthermore, the UK is still expected to grow faster than France and Germany, both of which are expected to post growth of just 1.2% in 2017, according to the International Monetary Fund (see Table 3).

The forecast inflation set out by the OBR is lower than that of Bank of England. OBR estimates expect CPI to peak at 2.6% in mid-2018 and for real earnings growth to be around zero next year. Encouragingly, the OBR does not “forecast that Brexit-related uncertainty will prompt more aggressive job shedding”.

The Government’s measures at the Autumn Statement will increase borrowing by over £25 billion over the fiscal forecasting period. The largest expenditure item in the Autumn Statement is the £23 billion allocated to the National Productivity Investment Fund. This will allocate £7.2 billion to housing, £4.7 billion to science and innovation, £2.6 billion to transport and £0.7 billion for broadband roll out.

The primary purpose of this fund is to boost the UK’s lagging productivity that is estimated to be 18 percentage points below the G7 average, according to the Office for National Statistics. The UK’s infrastructure is also in need of upgrading. In terms of road, rail and airport infrastructure the UK scores 27th, 19th and 18th out of 138 countries, according to the World Economic Forum’s Global Competitiveness Index.

The Statement’s focus on boosting productivity – particularly through the promotion of infrastructure and housing – is welcome. However, the Chancellor simply announced further borrowing for investment. Although modest compared to Labour plans, this is a concern given that the debt to GDP ratio is set to reach 90%.

It is also disappointing that the focus was on public investment, rather than examining ways of increasing the use of private investment. There were no measures put forward to improve the quality of infrastructure.

There was a welcome commitment to pilot accelerated housing construction on public sector land. However, further measures will be required to reduce regulatory burdens that are constraining housing supply. This was a major missed opportunity.

The Autumn Statement has also made some modest changes to marginal tax rates for the low paid. The Universal credit taper rating will fall from 65% to 63%, costing the Treasury nearly £1.9 billion over the five year forecast. This is a welcome, if slight, improvement in work incentives for the low paid. Under Gordon Brown’s tax credit regime, many low paid workers faced marginal tax rates above 70%

The Chancellor has recommitted the Government to the Treasury’s Business Road Map. This includes cutting corporation tax to 17% by 2020, which will be the lowest rate in the G20.

The Government has also recommitted itself to raising the personal allowance to £12,500 and raising the higher rate threshold to £50,000 by 2020. This was a specific commitment in the Conservative Party’s 2015 general election manifesto, and is necessary to counteract the problem of fiscal drag. It is estimated that an additional 1.5 million people were dragged into the higher rate tax band between 2010 and 2015. However, the raising of the rates will only have limited benefits for taxpayers. The OBR has noted that the thresholds would reach £12,340 and £48,440 by simply increasing them in line with CPI inflation.

Ahead of the Autumn Statement, there was speculation that the UK’s unilateral Carbon Price Floor (CPF) could be scrapped. However, the CPF’s price will remain at £18 per tonne – which is around three times the level paid in continental Europe. This is disappointing. The CPF needs to be cut in order to stop the further premature closure of more baseload power plants, which is currently endangering Britain’s energy security.

Abolition of the Autumn Statement

The Chancellor has announced that there will no longer be an Autumn Statement, limiting financial statements to just one a year. Budgets will now be presented in the Autumn of every year.

“No other major economy makes hundreds of tax changes twice a year” claimed the Chancellor. The abolition of the Autumn Statement could provide businesses with greater certainty over the UK’s tax regime. 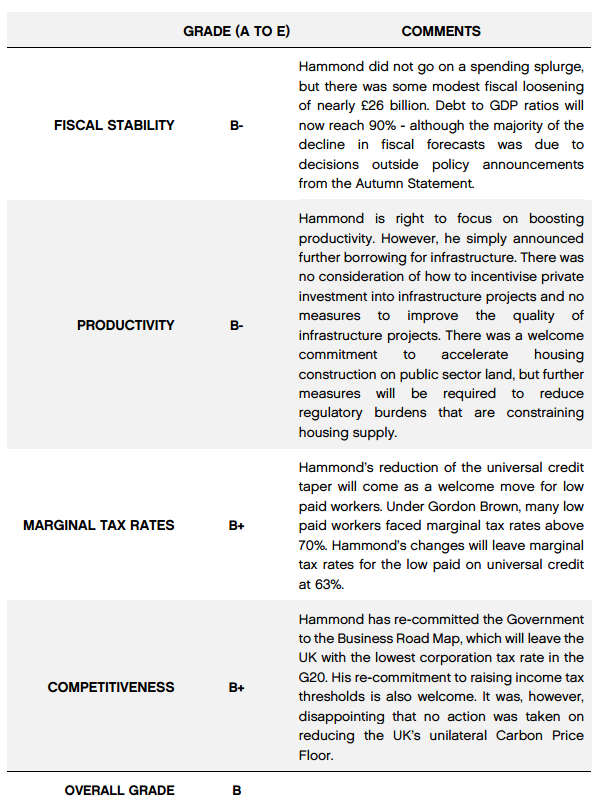