This article is an excerpt from our Growth Bulletin. To read the full article, click here. To sign up for our mailings, use the form on the left of our newsletter page.

THE CONTEXT OF TODAY’S SPENDING CUTS AND THE FISCAL RULES

The Coalition set out two new fiscal rules to deal with this. The first was the elimination of the current component of the structural deficit within five years. The second was for net debt to be falling as a proportion of GDP by the end of the Parliament.

As we’ve shown before, the first of these rules is largely meaningless, for two reasons. Firstly, the Chancellor has since described it as a rolling target. Secondly, the ‘structural deficit’ is itself determined by the nebulous “output gap” concept (which forecasters disagree on hugely). The second rule is harder for the Chancellor to dodge. But to make sure it does lead to more sustainable public finances, it must not be met through accounting tricks or clever loading of consolidation at certain points in time. What we ultimately need for our economic health is lower government spending and the debt-to-GDP ratio on a consistent downward path.

WHAT HAS HAPPENED IN THE FIRST TWO YEARS OF THE PARLIAMENT

On current policies neither of the rules are going to be met. Though the government is correct to state that the overall deficit (public sector net borrowing) has fallen by over a quarter (29%), on the two targets which the government has set, it is failing. 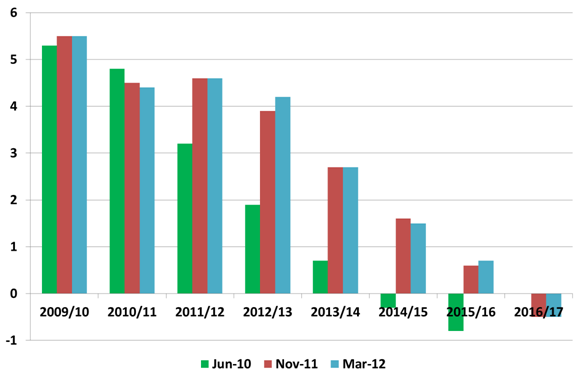 Figure 2 shows that public sector net debt was, in June 2010, forecast to peak in 2013/14 before being on a downward path thereafter. Budget 2012 revised this, suggesting that it would peak much higher in 2014/15 before falling into the next Parliament. With borrowing higher so far in this financial year than expected, and GDP growth lower, it now seems that even this second fiscal mandate will no longer be met. NIESR’s forecast, for example, suggests that the debt-to-GDP ratio will still be rising until peaking in 2016/17. 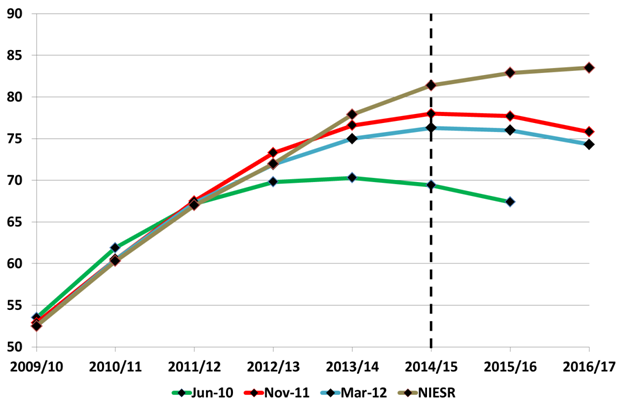 How did we get here? Well, the Government outlined in its 2010 Emergency Budget a fiscal consolidation plan with an 80:20 balance of spending cuts to tax revenue rises. On the spending side, the 2010 Comprehensive Spending Review set out totals for departments for a four year period. On the revenue side, it planned to raise VAT, Capital Gains tax and duties, but was reliant on growth to generate substantial extra tax revenue over the course of the Parliament.

With growth having been much slower than expected since then, these revenues have not been forthcoming. So even though the Government has largely delivered on the spending reductions it planned to deliver – spending was actually £8.9 billion less than the Coalition thought it would be by the end of 2011/12 – the deficit is not closing as quickly as expected.

But that’s compared to what the Coalition was expecting to do. It’s very stark what has actually happened when you look at the ‘real’ numbers between 2009/10 and 2011/12.

In the first two years of the Parliament (from the end of 2009/10 to the end of 2011/12), tax increases and capital spending cuts have done much of the heavy lifting in the deficit closure that has occurred:

In other words, as Tullet Prebon’s Tim Morgan has pointed out: “Government has mopped up most of the skimpy recovery in GDP for its own use” whilst adding over £250 billion to the net debt burden in the first two years of this Parliament.

Table 1 shows that there have, of course, been real terms cuts across most government functions, but on the current expenditure side these have been outweighed by the increase in debt interest payments and the rise in the cost of the ‘Social Protection’ or benefits bill.

THIS YEAR, THINGS HAVE ONLY GOT WORSE

In the first seven months of this financial year the fiscal position has worsened further relative to expectation. So far this year:

The result has been that, as Figure 3 shows, the current budget deficit is now rising again, back towards the outturn level for 2010/11. The IFS concludes: “If the trends in central government receipts and non-investment spending were to continue for the remainder of 2012-13, borrowing would come in £13 billion higher than forecast by the Office for Budget Responsibility in March.” 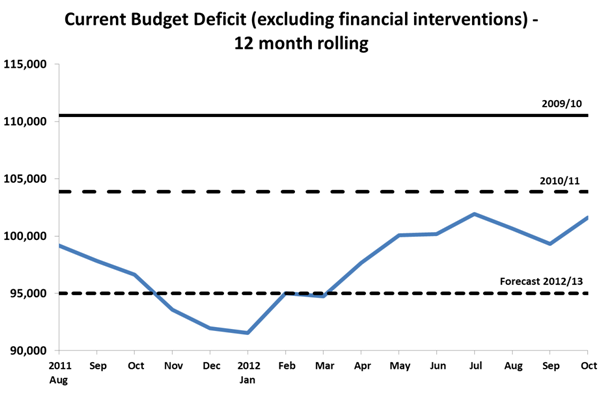 The rising deficit means that the OBR will almost certainly give Chancellor Osborne the news that his targets will not be met on current policies. If that happens, the Chancellor will have to decide what to do about the second fiscal rule (the commitment that the net debt to GDP ratio would be falling going into the next Parliament –  the first rule we dismiss as meaningless). The Chancellor is in a lose-lose situation here. If he abandons the target, the opposition will have a field day. If he sticks to the target, he will have to cut spending further – not necessarily a bad thing for our long-term economic health but disastrous politically as the next Election looms and the opposition ramps up the ‘savage cuts’ line. That is presuming he does not indulge in some clever accounting tricks (watch out for the interest accounting for QE). This would surely open up the Chancellor to accusations that he is the heir to Gordon Brown.

News that the target would not be met on current policy is not the end of the world, economically speaking, and as such should not be corrected through hasty changes to policy. After all, most analysts already expect that this target will be missed. And it’s clear that economic circumstances are much more difficult than envisaged when the rule was implemented.

What is more important than is that the government can demonstrate, through action, its determination to reduce government spending and get the debt-to-GDP ratio on a downward path. This is particularly important given the continued worse-than-expected performance of tax revenues. Remember, the last budget already forecast over £600 billion would be added to the national debt in this Parliament.

Any abandonment of the second rule must therefore be accompanied by the Chancellor setting out some longer term measures which will ease the debt burden in the coming years. This is so important, given that the debt burden will start rising in the 2020s anyway due to demographic pressures. He should also take the opportunity in the Autumn Statement to explain how the next Spending Review will take on some previous taboo areas, including:

It is clear that more spending cuts are likely to be needed in the coming years. This needs to be fully acknowledged, even if exact decisions aren’t outlined until the spending review, both to retain credibility with our lenders and to improve our long-term economic health.

This article is an excerpt from our Growth Bulletin. To read the full article, click here. To sign up for our mailings, use the form on the left of our newsletter page.