Source: HMRC
Note 1: These figures exclude the Bank Levy and the Bank surcharge.
Note 2: Total tax receipts have seen a more modest rate of growth than onshore receipts due to the collapse in tax revenues from offshore North Sea oil and gas. 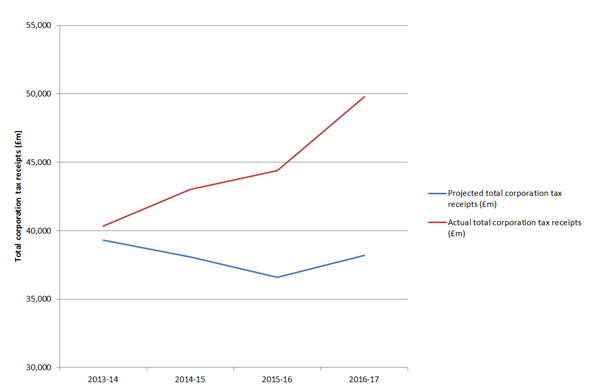 The current government is planning to further reduce the corporation tax rate to 17% by 2020, which will give an additional boost the UK’s competitiveness. However, the paper "Why Corporation Tax Cuts Work" by the CPS’ Head of Economic Research Daniel Mahoney – which has been updated following the publication of figures this week – highlights that Labour’s current commitments on corporation tax will undermine the UK’s competitiveness while leaving a series of unfunded spending commitments.

The Labour Party has publically stated that it would fund £15 billion worth of commitments by increasing the corporation tax rate to 21.5%. This will leave at least a £10 billion funding gap.

“The UK is now the 7th most competitive country in the world, up from 11th in 2010. This has been achieved by cuts to the corporation tax rate along with a raft of other measures.

This is a great achievement for the Government and the UK economy is reaping the rewards. The boost in competitiveness has led to buoyant corporation tax receipts – particularly onshore receipts – which have largely arisen from strong economic growth and higher profitability for companies.

This highlights the need to sustain the UK’s competitiveness by pursuing competitive rates of business taxation.

Labour’s plans on corporation tax and their associated pledges, on the other hand, would undermine the UK’s competitiveness and leave a series of unfunded spending commitments.”

Tim Knox, Director of the Centre for Policy Studies, added:

“Analysis set out in Why Corporation Tax Cuts Work demonstrates the failure to model accurately the dynamic effect of tax cuts. In 2013, shortly after the Budget, the OBR forecast that corporation tax receipts for 2016-17 would fall to £38.2 billion. In fact, in 2016/17, receipts were 30% higher than the original forecast, at £49.8 billion. HMT should recognise publicly that lower rates can lead to higher receipts and should urgently review the dynamic modelling it uses.”

This paper was originally published on 8 March 2017 under the title "The Case for Corporation Tax Cuts" and has been updated to include the most recent figures.